Racial harmony as a crowdfunded board game? Why I think it's problematic

Regardless of how well-intentioned this project could be, using a simple board game to introduce the Gordian knot of ethnicity and religion to kids might prove to be a wee bit ill-judged.

Attempting to break down complicated issues like racial harmony and diversity for children to comprehend is always worthy of praise, of course. But perhaps it could be deemed problematic when cultural mores are used for what appears to be a simplistic race-to-the-end board game, turning a delicate subject into competitive fun.

Raymond Tay, whose bio describes himself to be a veteran in the “human capital development” business, recently launched a campaign on Kickstarter, seeking funds for something called “Race to Harmony”. The man believes that his board game can promote racial and religious understanding among Singapore kids.

“It is important for every generation to promote and preserve such harmony in order to achieve peace and prosperity for all,” he wrote in the description of his campaign.

Tay is looking for $2,500 (a relatively low crowdfunding goal) to help fund his project, which is estimated to take about six months before it reaches the hands of backers. As of writing, two individuals have pledged a total amount of $148 for the campaign. Running on an all-or-nothing funding model, Tay won’t receive the contributed capital if it doesn’t reach its $2,500 goal by June 19.

Rolling the dice on race

How this game would apparently achieve peace among mankind is that players roll a dice and move their pieces across the board, with each spot determining if the player should pick up a question card or a card that requires them to express themselves. Points are awarded when they do either correctly. If not, they miss a turn.

Straightforward educational fun for kids, maybe. But take a gander at what the game has in store for the question and expression cards. A sample of a question card asks what Christmas commemorates — a rather broad query that could get more than a few correct answers. Instead, the game makes the answer binary. 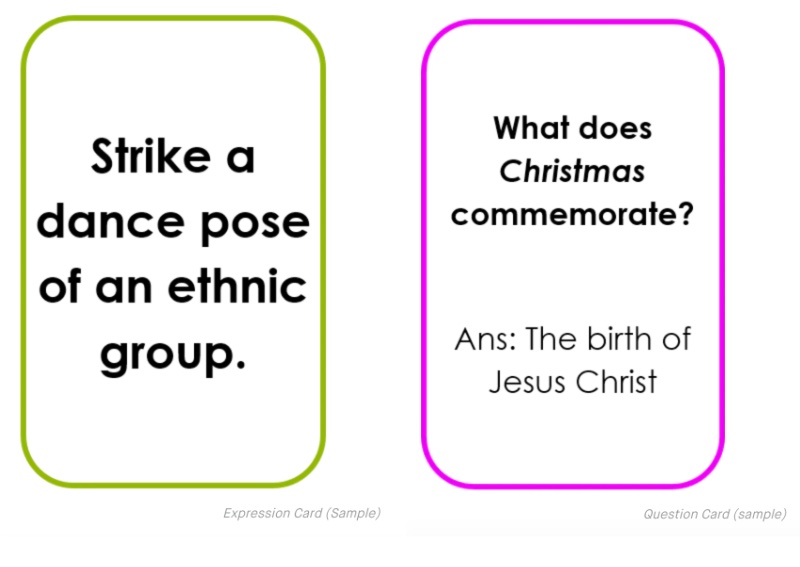 Meanwhile, a sample of an expression card requests players to “Strike a dance pose of an ethnic group”, which runs the risk of exaggeration and mockery.

All this, on top of how reducing racial harmony — a touchy subject in Singapore’s past and present — to a mere tabletop activity could be contentious. It’s more than just fun and games in real life of course, and skipping crucial issues like the legacies of societal prejudice and marginalisation in an educational tool would be a missed opportunity. Winning the game of cultural rapport isn’t as easy as rolling dice around.

i have questions. You have 23 days to....not spend your money. pic.twitter.com/uVPFXrsPP6

There’s also the question whether kids could actually glean anything further from a simple board game about inter-racial and inter-religious harmony here. Attitudes towards race and ethnicity have already changed dramatically for the better if we’re to go by the findings of the Institute of Policy Studies.

Outside textbooks, the internet-savviness of local youths would mean regular exposure to stories and anecdotes on social media by Singaporeans who experience racial discrimination, bringing awareness to the issue and paving the way for discussions. The abundance of social commentary online would serve better to provide more depth and discernment to the matter of race relations here instead of learning surface-level cultural factoids.

But then again, "Race to Harmony" could be intentionally simplistic. The responsibility of weaving through the intricacies of race shouldn't fall on a board game for kids when all it wants to do is educate children about customs and traditions they could be unfamiliar with. It would help if its maker consulted with a diverse group of people to gauge its sensitivities before kicking off production.

"This 'Race to Harmony' game is designed to promote racial and religious understanding among younger generations," he wrote. "It contains information on cultural practices and celebrations in various ethnic groups like Chinese, Malay, Indian and Eurasian and major religions such as Buddhism, Islam, Hinduism and Christianity."

Perhaps Tay is aware of the limitations of the medium and all he wants to do is contribute in his own way for everyone to "live harmoniously".

Ilyas Sholihyn is the Lead Content Strategist for Digital Culture at AsiaOne.