The Razer Huntsman V2 is hell-bent on killing keyboard latency

Razer is touting the new Huntsman V2 to be the fastest keyboard in the world.

The Huntsman is distinguished by its use of optical switches as opposed to the more traditional mechanical switches for its keys.

While arguably not as tactile or satisfying, optical switches are more responsive and actuate far quicker than traditional mechanisms as they utilise an infra-red beam of light to activate the switch signal, eliminating debounce delay.

They also stand up to wear better and Razer rates its proprietary optical switches for up to 100 million keystrokes.

The second iteration of the Huntsman features refined second-generation optical switches thanks to feedback from players and users.

Other improvements include the addition of a silicon sound dampener to reduce the clacking of keys that bottom out (when you press the key all the way down) during use, as well as more generous lubrication on switches and stabilisers to further reduce friction and noise.

Razer's HyperPolling Technology touts a true polling rate of 8000 Hz and when coupled with the lack of debouncing delay, gives the Huntsman V2 near-zero latency.

The new Huntsman also gets double shot PBT keycaps by default for the base model.

Once limited to the pricier models, PBT keycaps are more durable and less prone to turn shiny with extended use. 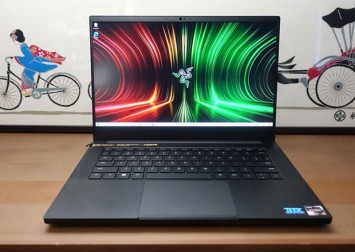 The two-stage moulding process also ensures that the legends are effectively fadeproof. And to improve keyboard acoustics, provisions have been made to dampen the case and absorb the excess noise that the switches make during use.

The Tenkeyless version eschews the number pad, dial, and media keys in favour of portability and also gets a detachable USB-C cable.

Prices for the Razer Huntsman V2 starts at $239.90 for the Tenkeyless and Clicky Purple Switch version.

This article was first published in Potions.