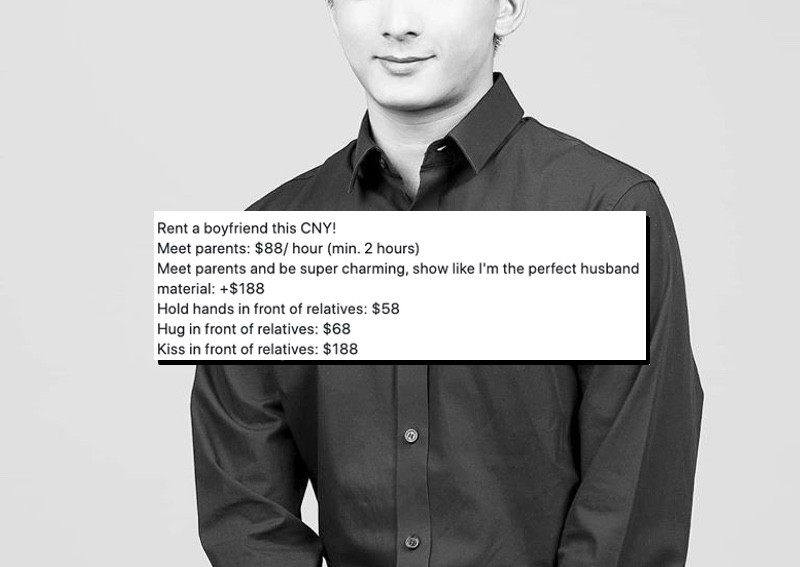 ’Tis the season to start looking for arm candy, if you’re in dire need of one, for making the rounds in Chinese New Year family gatherings.

Fake partners for rent are nothing new — some totally serious, some just posted on social media for laughs. This year is no different, and Facebook user Bryant Luo has jokingly put himself up for hire.

Prices are pretty steep though, once you’ve calculated how much you need to spill for his bespoke services. With a base cost of $88 an hour (at a minimum of two hours) to meet your parents, there’re still costs incurred for displaying various levels of intimacy in front of relatives.

The “newly added service” of assuring relatives that you and your alleged boyfriend have already applied for a Build-To-Order HDB flat is quite a sweet deal at $58. It’s just too bad that all ang baos Bryant receives will be his to keep. But hey, there’s a chance of getting lovingly hand-fed during hotpot dinners if the red packet amount he receives hits over $200.

Before you start sliding into his DMs, the man’s kidding — dude just wanted folks to have a little laugh before the big holiday weekend.

Elsewhere online, the offers of boyfriend services for Chinese New Year have emerged. On Carousell itself, there’re at least three new boyfriend-for-hire listings, with at least one of them being somewhat serious. 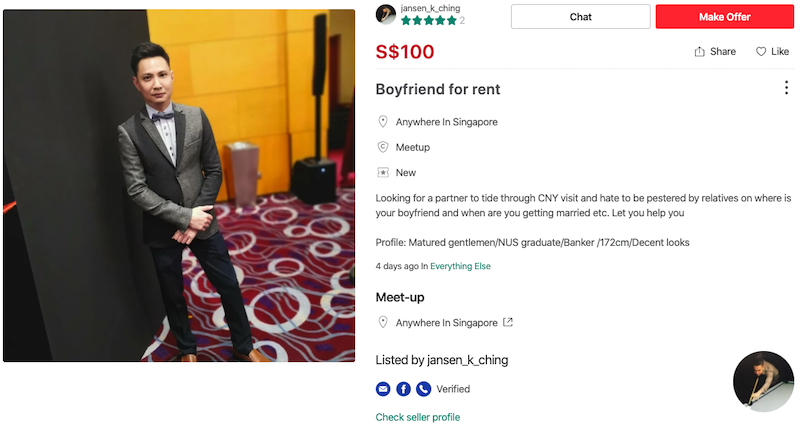 Funny internet person Carrine Low also got into the game with a rent-a-girlfriend ad of her own. It’s $100 an hour (or $88 if you’re a student) but it should be worth the cash — the 22-year-old is able to play mahjong, peel prawns, and is well-educated as an NTU graduate. Plus points for being “mentally, physically, spiritually superior to your ex” too.

For those who are really desperate to get infuriatingly nosy relatives off their backs, there are sites that legitimately provide male and female escorts and companions who can play pretend for a fee. Or you could just, you know, throw some hot sass back at the aunties who can’t stop pestering about your love life.