Singapore residents can soon use their SingPass mobile to scan a QR code instead of keying in their details when registering to visit a patient in hospital or making purchases at roadshows.

SINGAPORE - Instead of keying in their details when registering to visit a patient in hospital or making purchases at roadshows, Singapore residents can soon use their SingPass mobile to scan a QR code to do so.

These are among the ways a new tool developed by the Government called SG-Verify can help businesses save time and gain better access to government-verified data when it is launched by December.

This tool is the next step in Singapore's national digital identity (NDI) system , which is a single digital identity that residents can use to access services across both government and private sectors.

The Government Technology Agency (GovTech) announced SG-Verify on Tuesday (May 28) in its update of digital Government services.

GovTech said: "By the third quarter of FY19, the Government will launch SG-Verify, a facility for businesses to perform secure identity verification and data transfer through QR scanning.

"This will provide businesses an alternative for visitor registration and access, customer acquisition at roadshows, or any other use cases that require identification."

Also by December, an updated version of the Moments of Life app will be available which will include new services catering to seniors. The app is a digital platform for services and information that is currently aimed at parents and caregivers of young children. 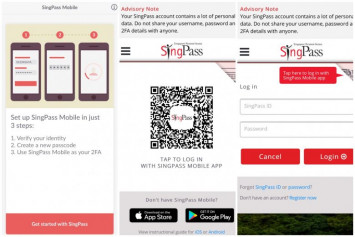 Introduced last June, it was meant to help parents avoid the hassle of going to different government agencies to complete forms and providing the same information repeatedly for services such as registering their children's births, applying for the Baby Bonus scheme and searching for preschools in their neighbourhoods.

The updated app will include relevant information and services that encourage seniors to lead active and engaged lives.

GovTech also said on Tuesday that the Government will be launching its trial for smart street lamps in Geylang and one-north business park in Buona Vista some time between October and December.

This Lamppost-as-a-Platform trial will gather surveillance information to give government agencies the lay of the land, allowing them to detect potential problems and respond quickly to incidents such as unruly crowds, train breakdowns, and traffic congestion.

The trial will assess the efficacy of using lampposts to connect and power various kinds of sensors to support municipal, mobility and security domains, said GovTech.

The agency also said there is greater satisfaction with government digital services, according to a new survey.

GovTech also said that this year, small and medium enterprises (SMEs) will be able to participate in over 80 per cent of its total info-communications and technology (ICT) contracts.

Chief executive of GovTech Kok Ping Soon said: "We are heartened that there is a growing pool of SMEs that have stepped up and embraced technology, and we will continue to work with them to uplift their capabilities while helping us build a Smart Nation and Digital Government."