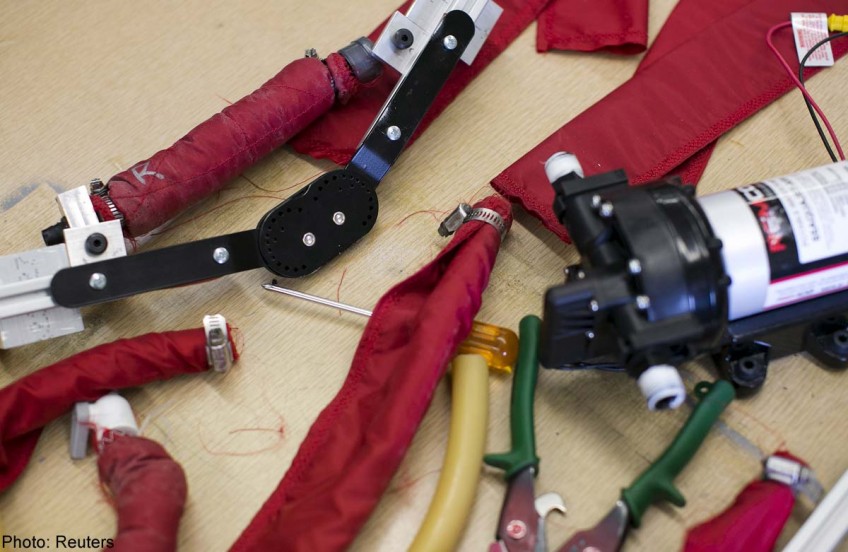 WORCESTER, Mass. - A hefty robot designed for search-and-rescue and a spindly four-legged rival that bounds along on hydraulic limbs will face off next month along with more than a dozen other entrants in the debut Vecna Robot Sprint Challenge outside Boston.

The robots, designed by student teams at the Worcester Polytechnic Institute, will be racing a lineup ranging from commercial available machines weighing hundreds of pounds to remote control cars jerry-rigged by teenage hobbyists.

The 100-meter out-and-back course, where the robots will accept a cup full of confetti at the turnaround, has no ambitions of attracting competitors on par with those in the US Defence Department-funded Defence Advanced Research Projects Agency Robotics Challenge, where some of the world's top minds in the field will show off creations that cost tens of millions of dollars.

Rather, the competition sponsored by robotics company Vecna Technologies is part of a growing breed of lower-key robot races sprouting up across the United States that experts contend could play a powerful role in attracting young students into the fields of science, technology, engineering and mathematics.

"It's a fantastic trend; I'm all for it," said Massachusetts Institute of Technology associate professor Russ Tedrake, who helped lead the school's fourth-place DARPA team in 2014.

Races like Vecna's, which he is not involved in organising, they seem to be drawing people in to the field, he added.

Competitions also help spin off new ideas that can grow into practical inventions, experts said. The fleet of self-driving cars that Google Inc has been testing relies on ideas generated at an earlier DARPA race, for instance.

On Friday afternoon at Worcester's campus about 40 miles (64 kilometers) west of Boston, 22-year-old senior Brendan McLeod and four classmates were working on their entry, nicknamed "Walrus," for Water and Land Remote Unmanned Search.

Their project was not designed for speed, McLeod admitted. The 80-pound (36-kilogram) device features four tracked flipper-like appendages that allow it to swim, climb stairs or muster a brisk walking pace on flat ground.

"We think we can expect to do (the 100-meter race) in about a minute and a half," McLeod said.

The robot, which features three cameras, has enough processing power to navigate the parking-lot course on its own and is so solidly built that team advisor Michael Gennert, who directs the school's robotics engineering programme, joked that it could run over a smaller entrant that stopped in its way.

The tank-like Walrus was designed as a senior project well before Cambridge, Massachusetts-based Vecna Technologies decided to host the event. Other entrants will be lower-tech, said Debbie Theobald, the company's chief executive.

"To keep the barrier for entry really low for this year, the robots don't have to be autonomous," Theobald said.

Worcester's other team will be entering a robot named the Hydro Dog, which will bound over the course on four legs powered by what assistant research professor Marko Popovic called "artificial muscles."

The rubbery tubes fill with water and then release it, using the change in shape that results to move the 35-pound (16 kilogram), knee-high robot's aluminium legs. The four students working on the Hydro Dog, however, were still determining what speed it might achieve.

Senior Thane Hunt, 23, said he was looking forward both to trying their creation in the contest and to seeing what strategies other teams had come up with to navigate the course.

Rival Worcester team adviser Gennert said he hoped more contests like Vecna's would sprout up in the coming years.

"The competitions have a number of positive outcomes," he said. "You inspire future generations of students."