About a fifth of patients in the study had intracranial haemorrhage, or bleeding beneath the skull, following an e-scooter accident.

With the rising popularity of electric scooters, emergency rooms are seeing a lot of head injuries, many with vision-threatening damage to the eyes, a small study suggests.

Researchers from the University of California San Diego (UCSD) reviewed data on 34 patients treated in two UCSD emergency departments with facial injuries as a result of e-scooter use between June 2018 and May 2019.

The patients faced surprisingly high rates of hospitalisation and need for surgery, many with complex facial fractures to the bones around the eye and damage within the eye, the study team reports in the journal Ophthalmology.

"When we looked more in-depth at the numbers, we were surprised at both the severity and incidence of the injuries."

About a fifth of patients in the study had intracranial haemorrhage, or bleeding beneath the skull, following an e-scooter accident.

More than 90 per cent had one or more facial fractures, most of them complex fractures, and 24 per cent needed surgery.

Among the 24 patients who received an eye exam, five had eyelid lacerations, one very severe; another had a retinal haemorrhage; and still another needed emergency surgery to relieve pressure inside the eye that was temporarily blinding him.

None of the patients had been wearing helmets.

E-scooter companies have supported minimising regulations that mandate the use of protective gear and, at the start of 2019, California loosened the law surrounding helmet use, mandating that only minors would be required to wear helmets.

Nikan Namiri, a medical student at the University of California, San Francisco who led the first national study that documented a rise in scooter injuries and related hospital admissions, believes the rationale behind the law was to make e-scooters more convenient as a form of "last-mile" transport.

But users don't understand the risks involved, said Namiri, who was not involved in the current study.

"The law makes e-scooters seem more benign than they truly are, and basically says you do not need a helmet to ride if you are over 18, which is not going to help these patients because the mean age in this study was about 37."

The study also found that 74 per cent of riders with facial trauma were under the influence of alcohol or drugs.

Over the past couple of years, the popularity of shared e-scooters has soared.

The vehicles powered by electricity offer an eco-friendly alternative to car rides and promise to relieve traffic congestion.

In many locations, scooters from popular rental firms like Lime or Bird are "free-floating", so users can end their trip at their final destination, instead of having to find a designated parking spot.

Farid Yaghoubtil of Los Angeles-based law firm The Downtown LA Law Group, who has represented injured riders seeking compensation from rental companies, notes that the for-profit model these firms follow depend on riders using scooters all the time.

"If it is mandatory to wear a helmet, many riders will simply elect to walk or call an Uber or Lyft," he said. 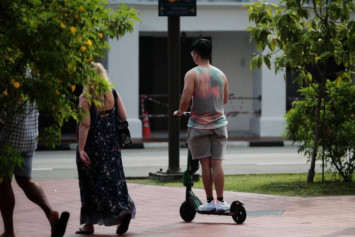 Lime, which said it did not sponsor or support the California bill, noted that it sends regular notifications to riders warning that drunk riding is a dangerous practice.

"Laws mandating helmet use for adult bicyclists have proven problematic to the extent that they discourage riding and have been unfairly enforced," said a spokesperson for Bird, which did sponsor the bill.

Oculoplastic surgeon and ophthalmologist Dr Don Kikkawa, senior author of the current study, said while it is likely the most severe cases were included in the findings, given that UCSD houses a large urban trauma centre, the data do shed light on the public health impact of e-scooter use.

"Safety should be paramount, as well as the need for additional support for continued study into the medical implications of this emerging mode of transportation."