Singapore may be small, but local talents have the potential to make a big splash internationally.

At a press briefing for Dungeons and Dragons' (D&D) upcoming Spelljammer release last month, it was revealed that local artist Julian Kok Joon Wen contributed a piece that will be published for millions across the globe to appreciate.

And his artwork isn't just one among the many in the illustration-heavy books that come with Spelljammer: Adventures in Space — it's proudly printed on the four-panel Dungeon Master (DM) screen, an accessory that comes with the set.

The new D&D campaign dives deeper into the multiverse and lets players go on their own space exploration and even what's beyond their own solar system.

In response to a query by AsiaOne, lead designer Chris Perkins (also a well-known name in the D&D community) praised Kok and shared that they didn't change much of his initial submission.

Referencing his artwork, Chris said: "We basically gave Julian a palette and we gave him a list of things that are typically found in Wild Space (D&D's version of space). And then Julian just did this, or, you know, a version of this and we had to make like very, very minor changes.

"Basically what you see here is what Julian came up with just based on some reference material that we sent him."

While D&D's biggest markets arguably are in the US or Europe, Chris estimated that "over 50 per cent of our artists now are not based in North America".

He attributed that to D&D encompassing a "broad range of artistic styles" and in recent editions, being more "inclusive" in its art.

"We've also teamed with Magic — Magic has a tremendous amount of art needs — and they have brought a number of artists into the fold... So that has led to us discovering artistic talent all over the world, [discovering] people who not only have a passion for fantasy but also have a passion for our brands, who live and breathe our brands and have since they were kids.

"And so we're giving them opportunities, not only to work with us, but to show their work to the community at large."

Though art has always been a core element of D&D and Magic: The Gathering, Spelljammer is going to be a little more picture heavy to make it accessible for new players and even those who might just be curious.

After all, everyone has heard of D&D through Netflix's Stranger Things but not many have ventured into an actual session.

The art budget is higher for this book, said Chris, who pointed out that previous books have an art budget of 25 per cent compared to Spelljammer's which is somewhere between 35 and 39 per cent.

He said: "We can show off many more characters, many more places. We were very careful about showing environments, giving you a sense of world and place, and sort of allowing you to imagine where you are in that place."

Showing off a picture of a big space hamster — which is incredibly adorable — he added: "This is a very friendly piece of art that will appeal to, I would say, more of our non-standard D&D fans...

"Longtime players will love this just fine, it's very enchanting. But I think younger players will look at an image like this and go, 'Oh, I want to be her and I want to have that pet.' We're trying to captivate people with our art, with our presentation and not make our words so dense."

The concept of accessibility also extends to the way information is displayed for players and DMs.

Where previous campaigns would have all of the information in a single book, Spelljammer has split them into three — The Astral Adventurer's Guide, Boo's Astral Menagerie and Light of Xaryxis.

The Light of Xaryxis is primarily for the DMs as it contains all they need to know to run the game for players. According to Chris, it's easier because DMs can "lay the adventure out flat in front of them and not have to flip back and forth for things".

Read Also
Confused over the Dungeons & Dragons movie trailer? We break it down for you 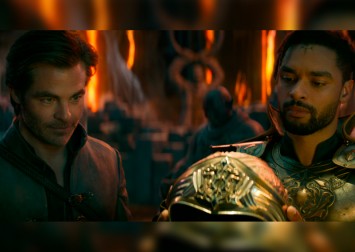 If you're looking for creature information and stats, then Boo's Astral Menagerie has all that you need.

As for players, they'll most likely refer to the Astral Adventurer's Guide which has pertinent information and descriptions related to the setting, characters, spells and items.

"One of the books contains a lot of material that players may reference and having that in a separate book means a DM can just hand that book off to a player," Chris added.

It may not sound like much, but it's actually a quality-of-life improvement when it comes to games as players will find themselves needing to refer to the book very frequently.

And what's D&D without an actual game to play?

To prepare players or new 'cadets' for Spelljammer, a collection of four adventures — titled Spelljammer Academy — is available for free on D&D Beyond, the online D&D marketplace and digital content library.

Chris explained: "They're meant to be like a training-wheels version of a Spelljammer adventure so that you can ramp up players who might be trepidatious or might not know anything about the setting."

It takes players from levels one to five so they can immediately start on the main Spelljammer campaign which is designed for levels five to eight.

"That's another olive branch that we haven't done in the past and we're looking to do with this product and possibly with future products as well," Chris said.

It's available on the Wizards website or, for local players, the Shopee store.