SINGAPORE - The Republic has topped the Smart City Index for the second year running, with the team behind the ranking saying the smart cities heading the list had handled the Covid-19 pandemic better.

This year's rankings took into account how 109 cities tapped technology in a lasting way to manage the coronavirus outbreak.

Professor Arturo Bris, director of the World Competitiveness Centre at IMD, added in a statement: "We have watched Singapore's performance over the last 12 months and have directly correlated Singapore's continued success as this prompt response to an unexpected challenge where other cities have faltered."

The city-state, said Prof Bris, had acted quickly and decisively.

"It had a clear road map that it followed but remained flexible. The citizens were kept informed and therefore onboard with the decisions and the loss of freedom that these entailed. The Government was in position to provide adequate compensation to those losing out and did this wisely," said Prof Bris.

The survey findings noted that a central pillar of Singapore's success has been its "resilience and promptness when confronted with the unexpected challenges brought by the pandemic".

"As an example, over 77 per cent of the sample surveyed agreed that information was clear and easy to access concerning the clarity and easiness of access to information on government decisions," said the business school.

Prof Bris said that cities with better technology have managed the pandemic better, but he added: "Smart cities are not the solution, but technology helps."

The index, which ranks cities by economic and technological data, was published by IMD in partnership with the Singapore University of Technology and Design.

It took into account the citizens' perceptions of how "smart" their cities are.

The team surveyed 120 residents in each city on their ideas of two pillars - "structures", referring to existing infrastructure; and "technology", in terms of the technological provisions and services available to citizens.

Each pillar was then evaluated over five key areas: health and safety, mobility, activities, opportunities, and governance.

"Reflected in this year's rankings is that cities have ever-differing approaches to technology as managing the pandemic has become increasingly important in local politics," said IMD.

On this point, it noted that cities in India (New Delhi, Mumbai, Hyderabad and Bengaluru) suffered significant drops in the rankings this year.

"This can be attributed to the detrimental effect that the pandemic has had where the technological advancement was not up to date. Indian cities have suffered more from the pandemic because they were not prepared.

"Furthermore, a common factor behind the drop in all Indian cities is a general decline experienced by all of them in the quality of infrastructure of the cities despite the technological solutions implemented to advancing it," the IMD said.

Singapore is one of two Asian cities in the top 10, with Taipei moving down one notch to eighth place. 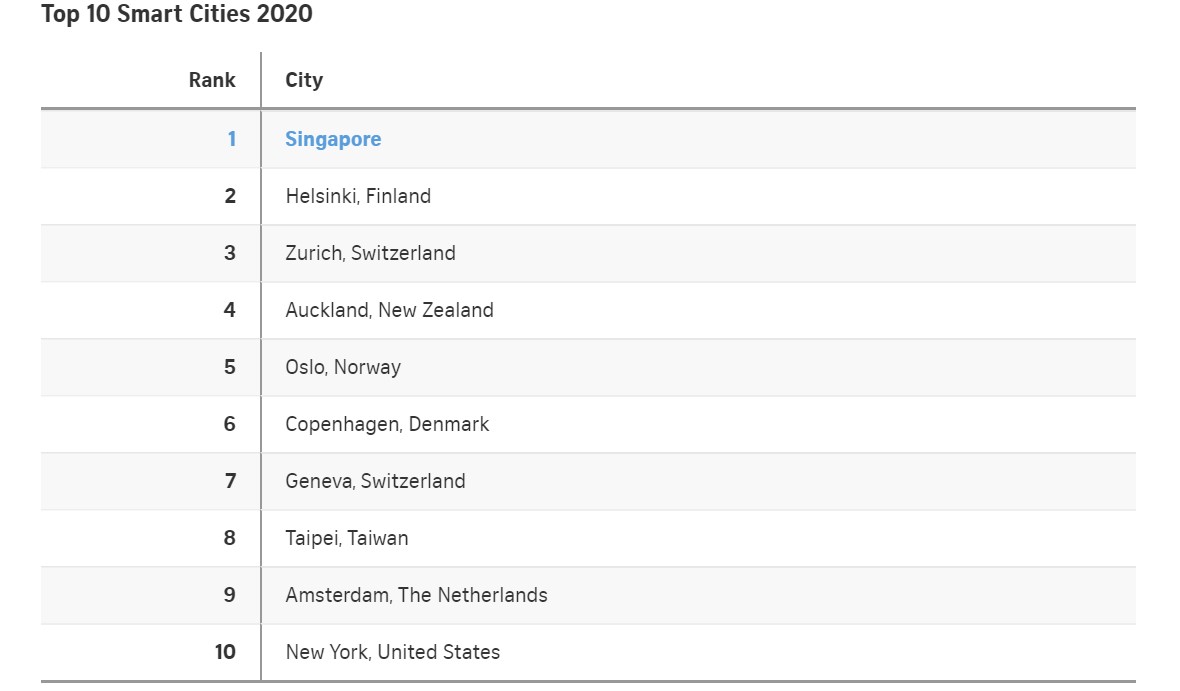