It’s a story as old as time itself. A young bird comes of age after going through an adventure in the wilderness, learning to find its own identity and accept itself after undergoing various tribulations through defeating thuggish magpies and collecting feathers.

All through the power of song and dance.

Of course, not all of us were raised by a peacock before setting off to find our true lineage. But the mythos of Songbird Symphony has always been universal — the search for belonging and the need to connect.

It forms the beating heart of the bird-pun-filled yarn by Singapore-based indie team Joysteak Studios, which launched the game on July 25. It took a couple of years of hard work developing the game (and developing burnout in the process), but the end result speaks for itself: Songbird Symphony peaked on Steam’s "New and Trending" category while also landing on the top-selling list, amidst the triple-A likes of GTA V, Rage 2, Doom and Fallout 4. Not bad at all.

On Steam, we are now #1 in New and Trending, and also the only indie title in the Top Selling list among other AAA titles!#pixelart #indiegame #gamedev pic.twitter.com/frSXYnbvO8

For a debut title by a three-man squad, the 2D platformer is finely tuned and charmingly endearing. Even if its roughly five-hour run-through is relatively undemanding, if you’re in groove.

Despite its cheery, vibrantly kaleidoscopic aesthetics, the story opens on a bleak note with your character — a precious blue-eyed chick called Birb — cracking out of its egg, only to get exposed to stormy rain with silhouettes of gnarled tree branches looming over it. It manages to outlive the mortality rates for fledglings without mothers thanks to a peacock who literally takes Birb under its wing.

Fast forward in time and Birb’s all settled into his new community, but dispirited from facing the constant micro-aggression from peacocks who don’t really accept him for looking different (relevant in today’s trying times). So he sets off into the unknown to seek out other bird communities and, along the way, learn their unique songs.

The plot isn’t much, but it’s an excuse for Birb to go around doing various tasks for various feathered characters, all of which will culminate in boss stages where you simply follow the beat and match rhythms.

That’s the main appeal, really, which has its pros and cons. On the one hand, it’s an easy enough mechanic for casual gamers to get into; on the other, you don’t really suffer any real consequence should you go off-rhythm. Birb doesn’t die from singing badly; he just gets a poor performance grade (you're welcome to try the stages again) and the story chirps on.

As far as sidescrollers go, the central portions of gameplay don’t really challenge players when it comes to platforming. Finger reflex-wise, Songbird Symphony is less Super Meat Boy and more the slow-paced flash games of yesteryears. Navigation-wise, you’ll find it similar to a Metroidvania game, but only in terms of backtracking and finding locations locked off because Birb has yet to learn a note that’ll, say, get a platform to move, for example.

Otherwise, there’s not much to discover or secrets to unlock, except feathers of other birds to collect. Puzzles can be solved, but abilities can’t be upgraded, and items can’t be equipped.

So that brings the question: what is the primary motivator of Songbird Symphony? Thankfully in a game that’s all about the power of song, the sound design and music are decent — which makes the feats of sound designer Muhammad Hanif even more impressive, considering that he’s playing the role of story writer and level designer as well. Baking the background music’s melodic progressions right into Birb’s level progression is a smart touch, subconsciously driving players to explore the (linear) map further to unlock fresh harmonies. Special shoutout to the tune that plays during the game’s cave-mining segment — it’s nearly as haunting as the Lavender Town theme in Pokemon Red/Blue.

But the heart of Songbird Symphony’s exuberant charm lies in the art direction itself. It hits you as soon as you take control of the chunky, bouncy bird-shaped sprite that is Birb, and if not, you best find your heart, son. Strutting, jumping and gliding your way through the world to meet other pun-slinging birds is an utter delight due to the lively animations and vivid colour palettes used, while the retro pixel art hits all the right nostalgia chords.

“Vivid colour” might be an understatement during the boss battles though, and things can get pretty distracting in the background when you’re trying to tap buttons in sync to the rhythm. 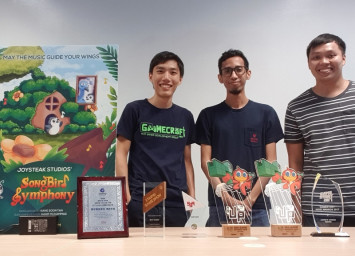 Honestly, the biggest thing that makes Songbird Symphony such a joy to play is knowing the story behind its development. Here is a local indie game studio that believed in this labour of love enough to put years of heart and soul into fleshing out a vivacious piece of art despite some initial pushback from family members and the limitations of a bare-bones team. And it all paid off. Songbird Symphony warbles a lighthearted melody, but a song that’s full of orchestral heart.

Songbird Symphony is available on Nintendo Switch, Steam and PS4. This game was reviewed via an early access code on Steam.