Startups in a jam as brakes pulled on e-scooters

IT was looming large but when it finally struck, the blow was still keenly felt by startups and businesses in the last-mile and delivery sector in Singapore that rely on the ubiquitous electric scooter to drive their operations.

Following a spate of high-profile accidents, e-scooters, already prohibited from roads, have been banned from footpaths from Tuesday, confining the personal mobility devices (PMDs) to 440 kilometres of cycling paths islandwide, instead of the additional 5,500 kilometres of footpaths riders could use before. Those caught flouting the rules can be fined up to S$2,000 and/or jailed for up to three months if convicted.

While e-scooter operators and food delivery firms have been putting in place contingency plans as pressure increasingly mounted on the Land Transport Authority (LTA) to clamp down, there is no hiding from the fact that there is a cost to be counted as plans are shifted, and business models and operations disrupted.

Local startup Anywheel, which was vying with 11 other firms for a licence to operate shared-PMDs in Singapore, began working on a backup plan at the start of the year when it sensed "strong concern" from LTA regarding e-scooters.

Anywheel's initial plan was to launch their e-scooters in Singapore before expanding to other markets. But with the public outlash against PMDs mounting in Singapore, it decided to set its sights on Malaysia, where it began operating hundreds of e-scooters last month.

The startup is now expanding to cities in Thailand and Australia, where physical infrastructure and cultural practices surrounding e-scooters are more established, founder and CEO Htay Aung told The Business Times. He said the firm suffered some financial impact from the setback in Singapore, but did not elaborate. 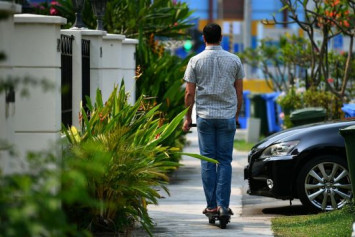 E-scooter operators Beam and Neuron Mobility are also targeting expansion in other markets, though both maintained they still have plans to operate in Singapore.

Observers that BT spoke to said that food delivery firms are likely to be the hardest hit. PMDs have become an integral element of this part of the gig economy, lowering the barriers for people to become delivery riders.

Prof Ng Weiyi from the National University of Singapore (NUS) Business School pointed out that PMDs were a natural, "ground-up" solution that emerged because of its ease of use and low cost. "(With the latest ban), the logistics of these companies will take a great hit," he said.

A Grab spokesperson said over one in three GrabFood delivery-partners rely on e-scooters to fulfil orders. It plans to respond by proposing to the authorities the possibility of allowing delivery riders who have displayed responsible riding behaviours the option to continue using e-scooters under certain conditions.

"During this period, we would like to seek consumers' understanding that they may have to wait longer for their orders or may experience an increase in cancellations by delivery-partners who may not be able to cover the delivery distance on foot," it said.

Grab will also suspend its shared e-scooter service GrabWheels progressively from Tuesday. It will refund all existing ride subscription plans to users in the next 30 days. 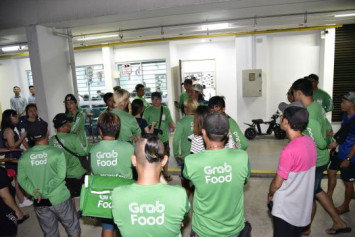 On the other hand, food delivery firm Deliveroo anticipates "minimal impact" to deliveries, given that PMD and power-assisted bicycle riders currently constitute 5 per cent of its fleet of 6,000. The company stopped onboarding new riders on PMDs from May this year, in light of regulatory changes and public concern.

Foodpanda did not respond to queries by press time.

The impact will be felt too at the individual level. A full-time Foodpanda rider that BT spoke to took issue with the one-day warning before the ban kicks in. "My question is, between now and tomorrow, how do I find another vehicle or another job in 24 hours? There's no back-up," said the 38-year-old rider, who only wanted to be known as Ben.

Industry observers were quick to note that this is not the first time that the sharing economy has hit the bumps here. Bike-sharing firms went from hot to limp as business models became unsustainable, and amid tightening regulations.

Experts say some parallels can be drawn between the e-scooter situation and the fate of bike-sharing firms such as ofo. "Too big, too soon," quipped Chua Joo Hock, managing partner at Vertex Ventures.

But Mr Chua also said that overall, the two situations are quite different. Bike-sharing startups were bogged down by indiscriminate parking. "When you make things too cheap and near zero cost, people don't take care of it." On the other hand, e-scooters suffered from a lack of suitable public infrastructure and rider education on how to use the devices in a considerate manner.

The more innovative startups may yet find wriggle room. Tan Yinglan, founding managing partner of Insignia Ventures Partners, said startups in the space can deliver more value to users and communities by installing intelligent speed limits on all devices and using data to track potential reckless driving before it even happens.

"In the same way that car makers installed seat belts back in the 1950s to better protect drivers, startups have the tools and impetus to innovate these types of vehicles and take a holistic, community-driven approach to make these technologies safe and accessible."