This Telegram bot helps you decide what to eat, perfect for indecisive Singaporeans

What to eat for our next meal is a dilemma many Singaporeans are familiar with.

If you're struggling to choose what to eat next (let's be honest, we've all been there), why not let a bot do the decision making for you?

Taking to the Singapore subreddit on Jan 8, Jason Lim shared with Redditors that he had created an automated service on Telegram called EatWhatSiaBot, which suggests places to eat based on your location and types of food based on your preferences.

Speaking to AsiaOne, Lim said: "The bot solves a very simple problem: it'll randomly suggest a dish to you. It also helps make planning meals with your friends easier and more fun — because it opens you up to options you might not have thought of."

Although the bot is up and running, it is still a work in progress, he added.

While EatWhatSiaBot is halal-friendly (you can toggle the halal option on and off by typing "/halal"), Lim said that he would need a wider pool of dining locations places so the halal filter can work better.

In his Reddit post, the bot creator shared that he is open to suggestions and feedback from the community.

"I always thought Mee Goreng was an Indian dish, but I received so much feedback saying it isn't considered an Indian dish. I guess I have to be careful with properly categorising the dishes and places," he mused.

The 24-year-old, who is a computing student at NUS, said that he "is not a very smart student in school" and although he is trying his best in that area, he has decided to devote more time to work on projects that he enjoys.

"I enjoy building things that can help make life easier for people, the bot is one of them!" he added.

Lim also shared that the most difficult part of the creation process was sourcing for eateries and categorising them.

"A bot like this would require a lot of data. From the list of things to eat to the list of recommended cafes. I sat down to list down some of my favourite cafes (my bro is a coffee addict, so I know quite a few cool cafes)." 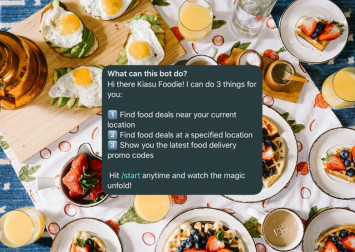 If you're wondering how he came up with the bot's name, it took him about two days due to his indecision. "The name was chosen because it's exactly how I'd ask my friends in Singlish when I don't know what to eat — 'Eat what sia?'."

In response to a Redditor's comment, he said that the recommendations were curated based on his favourite places, input from his friends and a cafe hopper on Reddit who was very willing to share.

Creating the bot has always been something that Lim wanted to do. "It was at the back of my mind for many months (or maybe even a year!), I just never had the time to begin."

He started working on the bot only a week ago.

The list of features available to you will be revealed upon typing "/" into the chat bar. From there, you can choose what you need the bot to do for you.

Of course, its primary function is to help you decide on what to eat, after clicking "/WhatToEat" the bot will have five options for you to choose from. If you really cannot decide on the type of cuisine you prefer, you could always just ask the bot to "surprise" you.

If the offerings from food stalls around your home are not something you're in the mood for, you could always type "/nearby" and see what new options the bot could show you. Lim told AsiaOne: "I also made use of a few government APIs to get some official data to help me process some of the locations."

If you're not comfortable with sharing your exact location with the bot, you can always just choose a general geographical area close to where you live.

And this is just the beginning.

His plans for the bot include improving the core functionalities such as filters for vegan, vegetarian and healthy food as well as adding new places and more food suggestions. He added, "As long as there's somebody using it, I'll keep updating it!

"Currently, "/WhatToEat" will only show you random food ideas, but I hope to also include a list of popular places (and maybe even nearby ones) for that particular list soon so whenever you ask "/WhatToEat", it also suggests a few popular stalls," he added.

According to the bot's data, the most suggested dish of the day (Jan 11) was Aglio Olio.

If you're not sure what to eat for your next meal, how about going with the crowd?