With drones becoming more common, measures must be taken to regulate their use and ensure these devices do not disrupt air traffic in Singapore, say industry observers.

The use of technology and regulations could help mitigate the issue, they added.

The Civil Aviation Authority of Singapore (CAAS) revealed on Wednesday that 37 scheduled flights had been delayed after unauthorised drones were spotted flying near Changi Airport.

The operations of one of the airport's two runways were also suspended intermittently between 11pm on Tuesday and 9am on Wednesday. A multi-agency team made up of the CAAS, Changi Airport Group, Singapore Armed Forces and the police was activated for search-and-locate operations.

The flying of drones within 5km of airports or military airbases, or at altitudes above 61m, without a permit is an offence. Those found guilty face a fine of up to $20,000 or up to 12 months in jail, or both.

Aviation industry consultant Priveen Raj Naidu said that there are "huge communities" of drone pilots who use the devices for various reasons. Thus, similar incursions into restricted airspace are likely to continue unless more defined perimeters are drawn up, he said.

"From a safety perspective, drones coming into airport airspace could prove very dangerous, as they could impede aircraft on their final approach or take-off," said Mr Priveen, adding that such incidents could cause serious damage to the aircraft and their engines. 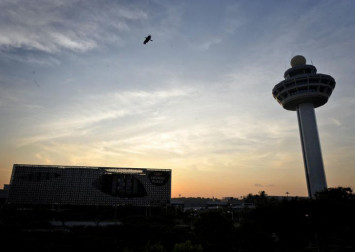 Mr Mark Yong, chief executive of drone operations platform and solutions firm Garuda Robotics, said: "With drones becoming more accessible and demand for them increasing, the continued safe operation of drones in our tight and dense airspace will rely on regulations, technology and education."

The introduction of a nationwide "unmanned aircraft system traffic management" platform could allow for drones to be monitored in real time, he said.

Researchers at Nanyang Technological University are looking into the possibility of such a traffic management system for drones here.

"Mandatory drone and pilot registration, coupled with tracking modules on board all drones, will allow the rapid identification and authorisation of lawful drone operators within the platform," said Mr Yong.

The Republic of Singapore Air Force has several weapons that can be used against errant drones, such as a jammer gun, which emits signals that can interfere with the control signals of drones.

In a Facebook post about the Changi Airport disruption, the Ministry of Defence posted a file photo of a jammer gun being used.

However, the use of jamming could affect airport operations such as radar and air traffic control, said Mr Yoram Oron, founder and general partner of venture capital firm Vertex Ventures Israel, which has investments in cyber security.

He noted that other solutions such as missiles or nets also run the risk of causing collateral damage.

However, emerging technology will allow the authorities to take over control of the drone and land it safely at a designated zone.

"It is also able to locate the position of the perpetrator, addressing the root cause of such incidents," said Mr Oron, describing it as the "only safe approach" in dealing with drones over airports.

Mr Yong said: "Basic standards for drone operator training and licensing must also be raised as the industry matures. The responsibility for safe drone use ultimately lies with the operators, who need to adopt a strict aviation safety mindset."