A live demonstration of artificial intelligence and facial recognition being used at the Horizon Robotics exhibit at the Las Vegas Convention Center during CES 2019 in Las Vegas on Jan 10, 2019.

SINGAPORE - The United States, followed by China, is the clear world leader in artificial intelligence (AI) development, according to a new index.

Singapore, with a score of 0.18, comes in 12th, a spot above United Arab Emirates in the list that includes Japan, South Korea, India and Israel.

The researchers assessed the countries on the indicators that incorporate the countries' preconditions, research and development, and the degree of commercialisation of AI. They assigned the US with a benchmark value of 1, against which the other countries are measured.

"The US still leads across most factors for AI research and development deployment, but China is poised to close that gap in the coming years, if it can avoid a global backlash," said Dr Olaf Groth, managing partner of the Cambrian Group, a US-based consulting firm. 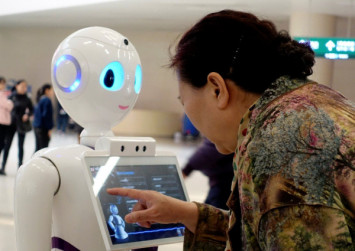 "However, this index reveals unexpected strengths in other countries, such as South Korea, and it shows key European countries mired mid-field at best," added Dr Groth, who is the co-author of the report.

Cambrian was commissioned by the Konrad Adenauer Foundation, a think-tank associated with a political party in Germany, to analyse the national strategies, research and development and commercial deployment of artificial intelligence.

The report noted that the US maintains global leadership in AI as it has a well-established co-operation structure between government, the private sector and universities, where the state's funding is focused on basic research, and the private sector concentrates on application research.

China, on the other hand, still lags behind the US in basic research, training of qualified specialists, the number of AI start-ups and internationally-enforced patents.

Dr Groth noted that the significant differences between leading nations, both in attitudes towards these issues and in their approach to solving them, has started opening deeper divisions in how to regulate and govern the development and deployment of AI around the world.

Because of the global nature of commerce and technology, these different values and strategies will create friction and raise considerable potential for economic, social and geopolitical conflict, he added.

As already illustrated by China's rapid expansion of its international influence and the European Union's General Data Protection Regulation (GDPR) and the Organisation for Economic Cooperation and Development's (OECD) recent endorsement of AI principles, decisions made in one country or region can reshape the governance and acceptance of AI technologies around the world, the consulting firm said.

"Governments, companies and individuals need to begin taking an active role in shaping not only domestic regulation, but global frameworks for AI as well," Dr Groth said.

The Cambrian group compared and benchmarked 13 leading countries based on more than more than two dozen individual factors, incorporating each country's preconditions for AI development, its research and development environment and its degree of AI commercialisation.