Virtual reality is being used to help girls deal with sexual harassment on campus, and Monica Baey approves

Monica Baey immersing herself in the VR simulation as part of Girl, Talk's pilot programme.

Sexual harassment in colleges is a disquieting issue that afflicts campuses around the world, but it’s one that’s finally holding larger scrutiny in Singapore of late.

There were 56 cases of sexual misconduct involving students from six local universities in the last three years, revealed Education Minister Ong Ye Kung in parliament last year. And that’s not counting the cases that have gone unreported by scared or silenced victims.

With that dreadful data in mind, four Nanyang Technological University undergraduates have an idea on how to harvest technology — specifically, virtual reality — to help make university campuses a safer place for their fellow students.

As part of their final-year project, the Wee Kim Wee School of Communication and Information students launched the campaign “Girl, Talk”, that utilises the burgeoning tech to empower female undergrads to respond to sexual harassment. 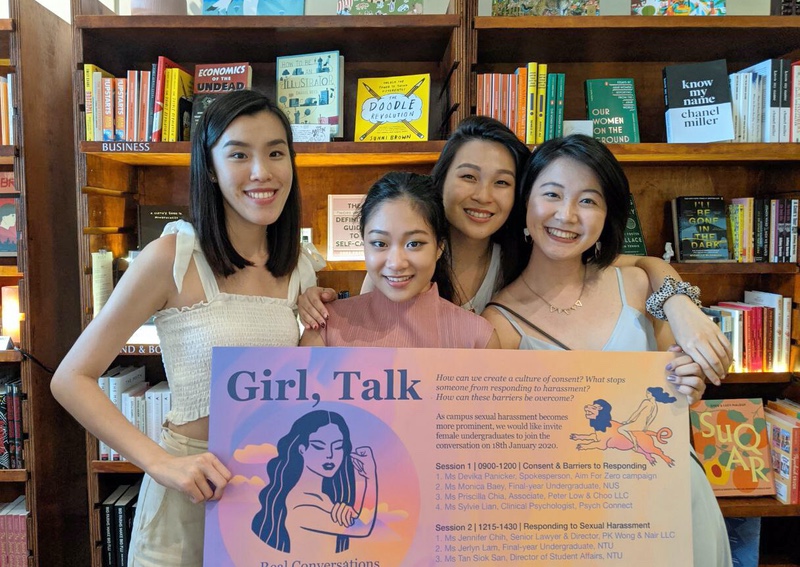 Aided by local VR developers Hiverlab, participants will have to don goggles to undergo virtual first-hand experiences in various scenarios as survivors or bystanders.

They could, for example, be at the receiving end of suggestive comments and unwelcome propositions for sexual favours. The simulated scenarios are based on real-life accounts from survivors who’ve actually encountered a similar situation on campus.

“We wanted to create a tech-enabled solution with the potential to reach and educate a wider audience, so that it can continue to be used as a tool, even in future training programmes,” said 24-year-old Seow Yun Rong, co-founder of Girl, Talk.

The intention here is to allow the practice of responses to re-enactments of verbal harassment, replicating emotional reactions without compromising personal comfort and safety.

While VR may seem like an unorthodox method, the simulated technique is quite similar to role-play methods in real life that are typically used for sexual harassment prevention training in the workplace.

The future is female 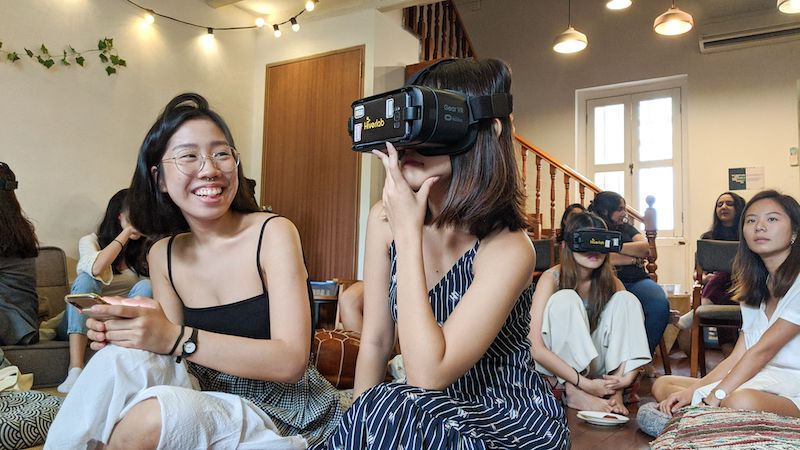 Since the Girl, Talk team released their prototype on Jan 18, participants have found the experience “innovative and useful”. The launch event saw over 50 female undergrads using VR to practice responding to campus harassment.

“It made the scenario more realistic, allowing me to think about what I could do to prioritise my safety and comfort in such a situation,” said National University of Singapore undergrad Ong Li Xian.

Even Monica Baey expressed her support for the initiative. The 24-year-old NUS undergraduate made headlines last year after going public with how her school dealt with fellow student Nicholas Lim, who filmed her while she was showering in campus. Monica has since become an advocate for survivors of sexual violence.

Thank you for having me @girltalk.sg 🤩 I enjoyed the session so much and I’m so thankful that more and more independent groups are coming together to inspire others in our community. Was sooo impressed by the group of girls behind this project 🥰 n also HELLO VR ROLE PLAY!!! !! !!!

“With efforts like Girl, Talk, we’re slowly making progress. We still may not always feel safe on [the university campus], but it helps to know our options and sources of support,” Monica remarked.

Sadly, harassment very much exists outside of the virtual world, and Girl, Talk also aims to create safer and more conducive spaces on campus by sharing resources and sparking conversations.