Wearable device for Covid-19 contact tracing to be rolled out soon, may be issued to everyone in Singapore

SINGAPORE - A wearable device for contact tracing may be issued to Singaporeans to help curb the spread of Covid-19.

This was announced in Parliament by Minister-in-charge of the Smart Nation Initiative Vivian Balakrishnan on Friday (June 5), when he explained that technical difficulties have prevented Singapore's contact tracing app TraceTogether from working well on iPhones.

"The app does not appear to work as well on iOS or Apple devices," he said.

This is also why TraceTogether, the government app that identifies people who have been in close contact with Covid-19 patients, has not been made compulsory, he added.

Dr Balakrishnan, who is also the Foreign Minister, was replying on behalf of the Prime Minister to questions on whether more could be done to boost the use of the app for contact tracing.

Mr Vikram Nair (Sembawang GRC), asked if TraceTogether should be made compulsory, while Mr Gan Thiam Poh (Ang Mo Kio GRC) wants to know if the Government would consider measures to encourage those not familiar with technology to download the app.

The Smart Nation and Digital Government Group (SNDGG), which Dr Balakishnan is in charge of, comes under the Prime Minister's Office.

TraceTogether identifies people in close contact with a coronavirus patient via wireless Bluetooth technology. The app is useful when those infected cannot recall whom they had been in close proximity with for an extended period.

Dr Balakrishnan said that unlike devices that use the Android operating system, Apple devices suspend the use of Bluetooth scanning when the app is running in the background.

"We have had repeated discussions at both the technical and policy level with Apple, but we have not yet been able to find a satisfactory solution," he said.

"Because TraceTogether does not work equally well across all smartphones, we have decided therefore, at this point in time, not to mandate a compulsory use of TraceTogether."

Dr Balakrishnan said that if the proposed wearable device works well, the Government may distribute it to everyone in Singapore, which he said will be more inclusive and ensure all Singaporeans will be protected.

The Straits Times has contacted the SNDGG for more information, including the number of the wearable devices that will be issued and their recipients.

Dr Balakrishnan said about 1.5 million users have downloaded the TraceTogether app since it was launched in March, which works out to only 25 per cent of Singapore's population.

This falls short of the optimum number of users that is needed for the app to work well - which is about three-quarters of the population.

Last month, the Government announced that migrant workers who live or work in higher-risk environments will be required to download the latest version of the Government's TraceTogether mobile app to aid contact tracing.

Since then, SNDGG has not announced any plans to use the API. 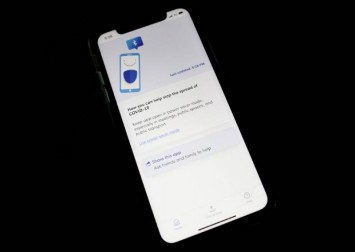 On Friday, Mr Gan also asked for the breakdown of the users of TraceTogether, to which Dr Balakrishnan said that such data is not collected by the app.

In a release on Friday, the SNDGG said that TraceTogether has been updated with new features like having the app in Tamil, Malay and Chinese, and allowing users to register for the app using their NRIC, Foreign Identification Number (FIN) or passport numbers.

The app also now features a NRIC/FIN barcode enabling quick and secure check-in at locations with SafeEntry, which is the Government’s digital check-in system for contact tracing purposes.

“The use of identification numbers for registration is an important new feature as it facilitates quick and accurate contact tracing and allows greater interoperability between TraceTogether and SafeEntry,” said SNDGG.

“By verifying each user’s identity at the point of onboarding, contact tracers can more accurately identify and inform the close contacts even if their phone numbers change or if the phone is switched off.”