WHO's #PlayApartTogether encourages playing video games as a healthy pastime

It's been a rather tumultuous time for the world, as the Covid-19 pandemic continues to run rampant across many nations.

In an interesting turn of events, however, an unlikely hero seems to have taken up the rallying cry to raise the spirits of those quarantined at home: video games.

This is part of a new campaign kickstarted by World Health Organisation (WHO), called #PlayApartTogether, to encourage people to pick up gaming controllers, keyboards and handhelds alike to play games together, but in their separate homes.

The hashtag is as self-explanatory as it gets - playing games together at home, whether online or not, will not only encourage social distancing, but also serve as a healthy form of distraction amid the stress caused by the coronavirus outbreak.

Joining the campaign by WHO are 18 video game companies, who will be stepping up their efforts in raising awareness to play more video games in wake of this trying period.

The companies involved in the initiative are:

"We're at a crucial moment in defining outcomes of this pandemic," said WHO ambassador for global strategy, Ray Chambers in a recent statement on Twitter. "Games industry companies have a global audience - we encourage all to #PlayApartTogether. More physical distancing + other measures will help to flatten the curve + save lives."

We’re at a crucial moment in defining outcomes of this pandemic. Games industry companies have a global audience - we encourage all to #PlayApartTogether. More physical distancing + other measures will help to flatten the curve + save lives. https://t.co/QhX0ssN0lH

"It's never been more critical to ensure people stay safely connected to one another," said Activision Blizzard CEO, Bobby Kotick, in a statement of his own. "Games are the perfect platform because they connect people through the lens of joy, purpose and meaning. We are proud to participate in such a worthwhile and necessary initiative."

While 18 video game companies doesn't seem like a lot at first glance, given there are so many big names out there that aren't on this list, it wouldn't be fair to rule out that there aren't a lot of titles involved in the campaign. 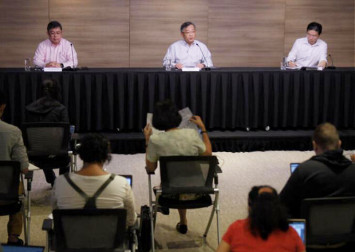 Activision Blizzard, alone, has the likes of World of Warcraft, Call of Duty: Warzone, Call of Duty: Mobile, and Overwatch, to keep players preoccupied.

Riot Games, likewise, have League of Legends, Teamfight Tactics, and Legends of Runeterra, which have largely consistent player bases as well.

And if the titles fronted by the 18 game companies above, there are always a ton of games to #PlayApartTogether, even if they're not officially part of the initiative.

You can check out our list of top co-op games to try out with friends online, or even just free games that are being put out by other video game companies at the moment.

Additionally, there are a host of AAA games to look out for in the coming weeks, including Resident Evil 3 (3 April), Final Fantasy VII Remake (10 April), and Gears Tactics (28 April).

Alternatively, if games ultimately aren't your thing, there are many other ways to pass the time during quarantine, such as TV shows on the various streamers, both from the East and West, and even free e-books and audiobooks.