Why Adventures In The Forgotten Realms is the best time to start Magic: The Gathering

Cards from Dungeons & Dragons: Adventures in the Forgotten Realms

PHOTO: Wizards of the Coast

With the release of every new expansion set, the pool of cards for the 28-year-old Magic: The Gathering game grows, and to the uninitiated, there might never seem like a good time to get into the beautiful game, until now.

After acquiring the famed Dungeons & Dragons (D&D) brand in 1997, the merger of magic and dragons is upon us, as Dungeons & Dragons: Adventures in the Forgotten Realms (AFR), the first D&D and Magic crossover set will add 281 new cards to the game on July 23, and it’s only been over a month since the last set release!

Jumping into any Magic card set might seem daunting, but Adventures in the Forgotten Realms offers an easy entrance for anyone to dive into the world of Magic.

Just look at it from the publisher, Wizards of the Coast, point of view – they want to attract fans from other franchises (hence the crossover), and still need to make the set fun, exciting, and balanced right from turn one.

Now with a good majority of the cards already previewed in the spoiler season, there are clear signs that AFR is the best reason in a while to start playing Magic.

Beginner-friendly features from Adventures in the Forgotten Realms

Living up to the Dragons half of this crossover set, Adventures in the Forgotten Realms packs a lot of heat from the flying beasts, with at least one from each colour represented.

Dragons have been a mainstay creature type in Magic, though they’ve not been particularly useful in the competitive scene. That’s because dragons are all about big flying beasts that cost a lot, but only look cool on the Battlefield.

To help new players, Adventures in the Forgotten Realms is filled with choice cards. Instead of a Magic card offering a fixed, rigid effect, choice cards offer players an action that suits their needs for the specific moment.

It bears some similarity to the Command cards, such as Lorehold Command or Silverquill Command, seen in the last Strixhaven set, which offers players the flexibility of selecting relevant modes.

However, the Command cards are rare cards not always seen or acquired by new Magic players, even in a pre-release event.

Read Also
Magic: The Gathering Adventures in the Forgotten Realms - how to get started for beginners 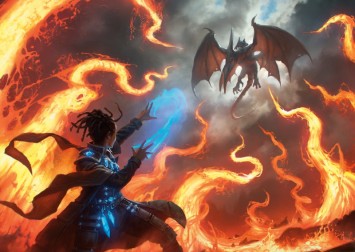 That’s not the case here as the choice cards in the AFR set are more readily available due to their Common and Uncommon rarities, which means beginners can definitely use them in their decks.

Choice cards are especially useful for new players because it takes away a small part of randomness in the game.

For example, rather than having a card that destroys only an Artifact or Enchantment (card types not as commonly used as Creatures), you find a Cursed Idol that gives you an additional, evergreen choice to create a Treasure token, and also venture into the dungeon (see the last point).

Since Treasures are useful in all situations since it generates Mana, and dungeons can always be ventured, new players are given the option to benefit from these choice cards.

It’s a game of strategy and chance

Wizards isn’t done with the D&D flavour in the Adventures in the Forgotten Realms crossover set, as there are at least a dozen cards that make use of a 20-sided die (aka a d20) to generate random value.

Magic has also had an element of luck involved because of the randomness of shuffling and the fact that you need to draw Land cards to build a Mana pool. Beyond that, strategy comes into play and that’s where newer players could find themselves at a disadvantage.

But with the introduction of activated d20 abilities, anyone can overturn a looming defeat into a roaring victory.

Look at Earth-Cult Elemental – it enters the Battlefield with a d20 roll trigger. A new player could very well roll between 10-20, netting great value by killing off one or two of the opponent’s Creatures.

No matter how seasoned the opponent is, if luck is not on his or her side, strategy may not be enough to take the game. 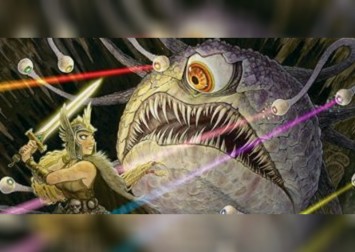 Likewise, the Mythic Rare card, The Deck of Many Things, can literally win you the game if you hit that magical 20 in a d20 roll.

The 5 per cent chance to roll a 20 isn’t unthinkable – take an opponent’s Creature for yourself, and use it to either block their attackers or find a way to kill it yourself so that you win the game.

If you have very few cards left in your hand, any number rolled will provide value, which is what beginners need.

You can even roll that dice as many times as you want as long, as the Artifact stays alive and you have the Mana to tap it.

This came as a nice little surprise during spoiler season, but the new Enchantment sub-type Class is a nice hybrid between Enchantment Sagas and the old level-up mechanic often used in Creatures.

In terms of gameplay, Class cards can provide even more value than Sagas because they don’t get sacrificed at the end of the last chapter, though there is the drawback of players having to sink Mana to level up to the higher (and more powerful) stages.

These Class cards pay homage to character building in Dungeons & Dragons and other role-playing games, where players choose a character class (such as rogue or wizard) and later invest in building their characters’ stats.

In Adventures in the Forgotten Realms, you don’t level up on a Creature (because it’s been done before), but having it on an Enchantment that is harder to remove would make it an uncomfortable situation for seasoned players.

Apart from Class cards, there are also Dungeon cards that are not placed into your deck.

Whenever a card tells you to “venture into the dungeon,” you start on a new dungeon adventure, or progress to the next room if you’re already in one dungeon. Somewhat surprisingly, there are only three Dungeon cards in Adventures in the Forgotten Realms.

It might be a while before such a beginner-friendly set will be in sight again, as there aren’t any new full crossover sets announced for the rest of 2021.

Dominaria (2018) was the last great set perfect for beginners, so who knows how long one would have to wait for another set like Adventures in the Forgotten Realms?

ALSO READ: Magic: The Gathering is in the righteous, geeky hands of the Russo brothers for its Netflix series adaptation