Xbox game review: Boyfriend Dungeon has sultry charms but this isn't a relationship built to last

Last week, I had no boyfriends. This week, I have three - so you could say I’m doing pretty good for someone stuck at home.

My new romantic partners come courtesy of Kitfox Games’ Boyfriend Dungeon - a dating simulator that doubles as an action-heavy dungeon crawler. You plow through floors of enemies, hacking and slashing your way to better loot using the power of love - quite literally too, because those romantic partners I mentioned?

They’re also your weapons. That’s right, Boyfriend Dungeon is all about taking a special interest in your weaponry - whether you’re in the heat of combat or on a hot date.

I was sold based on that premise alone, and while Boyfriend Dungeon’s humour and stylised art provide romantic and violent thrills, its charms wear off quickly when you realise there just isn’t much going on beneath its surface.

Put it this way: if Boyfriend Dungeon were an actual date, I’d look at it as more of a fun fling. Hey, we had a fun time together, but…where are my shoes? I’ve got a thing I need to get to.

In Boyfriend Dungeon, you play as a newcomer to Verona Beach - a summertime city where romance is in the air and monsters are in the mall. No, really - monsters have infested the local shopping mall, and they take the form of your darkest fears.

In this world, humans come in two distinct categories: ‘Weapons’ and ‘Wielders’. Weapons are people with the ability to instantly transform into weapons (duh), though they lack the ability to fight on their own. Wielders work with Weapons to slay monsters and face their inner demons.

While all this might sound a little intense, don’t let it distract you from the real reason you’re here: love! Upon arrival in Verona, you meet up with your cousin Jesse, a nosy fellow who takes it upon himself to find you a date - seeing as you’ve never actually been on one before.

It doesn’t take long before a tsunami of romantic options comes crashing over you, as they often do, and suddenly you have a wealth of suitors to consider. Most of the dates you go on are with Weapons you find unconscious in the dunj, which is in-game slang for dungeon, believe it or not.

That’s the basic premise - date weapons in the real world and slay monsters with them in the dunj. The story introduces you to a painfully obvious antagonist who hounds the player at every turn, and that eventually snowballs into the game’s climax.

The game loses its lustre in these moments - when you’re just doing the same thing over and over again, and it has no new content left to show you in between runs. Moving the story forward feels like actual work, and it’s thin enough as it is.

Let’s talk about my many new relationships. Putting aside the unusual amount of monsters representing your darkest fears, life in Verona Beach has its perks. Boyfriend Dungeon has a diverse cast of suitors for you to date, and there’s some really great representation in that roster.

The way this game approaches consent has stirred controversy lately - largely due to its villain, but it feels like folks have missed the forest for the trees.

It’s difficult to find big-budget Triple-A titles with this amount of racial and gender-based representation, and I honestly feel like that impacted my enjoyment of the game in a positive way. You just love to see it! 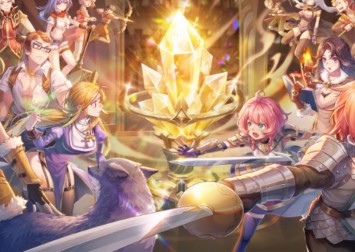 Boyfriend Dungeon doesn’t punish you for dating the entire available roster, either. All parties involved share an understanding that you’re just playing the field, dating around and trying to have a good time. I noticed a few dialogue options that even allowed me to turn romantic advances down entirely - not that I ever went for them.

It seems like the game allows for platonic and asexual relationships as well, which is a nice touch. As far as dating simulators go, there isn’t a whole lot of depth to these mechanics - but there is a surprising amount of room to be who you want to be.

When I say that Boyfriend Dungeon’s dating simulator segments lack depth, what I mean is that they often feel like you’re progressing through very linear and predictable storylines. When you’re answering texts and picking dialogue options, characters might remember specific choices and mention them later - but there is otherwise a disappointing amount of interactivity on offer.

It also takes a lot of time to flesh your companions out - seeing as the game forces you to grind the dunj just to go on one date per level gained. The cast’s often shady backgrounds are interesting enough to pique your interest, but there is way too much time spent grinding out XP before you actually get to pursue those relationships.

So let’s talk about the dunj, then. I’m trying to avoid drawing too many comparisons to Supergiant Games’ phenomenal roguelike Hades, but they do handle their dungeons more or less the same way. You’ll find yourself fighting through floors of randomly generating enemy types - all of whom take the form of technology.

There are flip phones that snap at you, rotary phones with crab-like pincers and record players that fling vinyls at you as if you’ve just told them ABBA’s getting back together for hologram concerts.

The deeper you go, the more difficult things get. More enemies show up and tougher bosses occasionally impede your progress, but you’ll also stumble upon new weapons to fight with and take on dates in the real world. Every time you level a weapon up, you unlock abilities unique to them - and you also get a new date out of it.

Upon defeat during a dungeon run, you’ll be stripped of your consumables and booted out - but all your hard-earned XP and weapons are retained. You also don’t need to start from scratch with every run - as elevators let you travel down to specific floors once found in the dunj. Progress is much more forgiving than Hades, I’ll tell you that much.

It’s also not as interesting, unfortunately. Each weapon introduces new perks and fighting styles, so there is some range there. For example, twin daggers can temporarily stun enemies whereas the Talwar works best for crowd control.

You can combine light and heavy attacks for combos, but it’s mostly a button-mashy affair. You could skate through the entire dunj using just one combo and a few consumables, and that really hurts replayability.

Enemies aren’t very interesting to fight against either. Even in bossfights, their attack patterns are incredibly predictable, to the point that even large waves of enemies fail to spice things up - and their unimaginative designs don’t really help. You’re just… fighting phones.

A lot of this review might come off negative, but I should note that I enjoyed Boyfriend Dungeon quite a bit - at first. Its story and characters draw on themes centered around modern relationships and dating, and for the most part, it’s handled well.

Your potential suitors come from diverse backgrounds and occupations, and that makes for a few interesting - sometimes downright hilarious - interactions. Maybe it’s just my growing desperation for social connection in these trying times, but I also enjoyed its real-time texting system. The way characters communicate online in media rarely intersects with reality, but Kitfox did a pretty good job there.

While I enjoyed the time I spent with my virtual partners and cat (yes, there is a cat companion too), I did not appreciate being forced into the dunj to grind for opportunities to spend time with them.

The idea of an action-dating simulator seemed attractive at first, but these two sides of the game don’t seem to get along. If you divided Boyfriend Dungeon into its dungeon-crawling and romance-simulator halves, you’d get two functional, but lacklustre games. Shoving them together makes for an interesting but ultimately uneven package.

That being said, if you have Xbox Game Pass and a few hours to spare, I would definitely give Boyfriend Dungeon a try. It approaches a novel premise with sincerity, and there’s value in that.