Being a staple hawker fare in Singapore, the humble Hainanese chicken rice is often regarded (by both locals and foreigners alike) as one of the Lion City's national delicacies.

Berlin-based travel vlogger and home cook Antoine Shapiro loves it so much that he created it from scratch for his first cooking video on his YouTube channel (My Name Is Andong) back in January 2018.

After gaining 120,000 subscribers within two years, Andong decided to revisit that same video by taking his love for Hainanese chicken rice to a whole new level.

"This time we are gonna do it right," he emphasised.

Earlier this month, he flew down to Singapore to pick up his friend before both of them caught another flight straight to Haikou, Hainan. Without any itinerary planned, they first began their toothsome investigation with the locals.

The Hainanese chicken rice that we are familiar with is referred to as Wenchang chicken in Hainan, and as Shapiro found out, it's also one of their Four Great Hainanese Dishes. Unbeknownst to them, one had to travel to Wenchang, the southern region of Hainan, in order to taste the most authentic Wenchang chicken.

After exploring Haikou, they ultimately travelled to Wenchang and had a taste of the original dish which gave rise to the Hainanese chicken rice that we know and love in Southeast Asia.

With such amazing flavours, Andong couldn't help but claim that it was the best chicken he ever had in his life. "Is it the sauce or am I drooling, you'll never know," he exclaimed.

Andong went on to explain that Wenchang chicken does not necessarily refer to just one recipe, but refers to "good quality, mature chickens" that have lived in Hainan. It is all about "the pure chicken flavour", he gushed.

Soon after, they caught yet another flight and had arrived in Singapore the very next day for an obligatory pitstop at Maxwell Food Centre's famous Tian Tian Hainanese Chicken Rice stall. 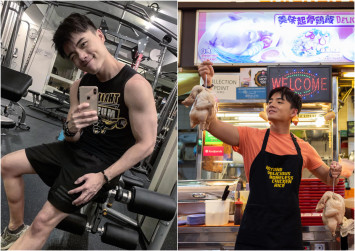 Trying Singapore's version of the Hainan dish for the first time, he was pleasantly surprised that the rice was the star — not the chicken. "This rice is an umami explosion!” he enthused.

Shapiro's epic chicken rice adventure has since been viewed over 26,000 times since it dropped on Nov 23.

Commenters expressed how they were impressed with his command of Chinese and his knowledge of China, while others have been thankful for the YouTuber sharing his experiences in his search for the roots of Hainanese chicken rice.