A forum letter published on Chinese daily Lianhe Zaobao has had social media abuzz over a highly controversial perspective on Singapore’s migrant workers.

On Monday (April 13), the forum writer urged people not to point fingers at the authorities for the reportedly appalling living conditions found at migrant worker dormitories.

The cramped and unhygienic accommodations of S11 Dormitory@Punggol was reported by The Straits Times earlier this month after the announcement that it is a Covid-19 cluster and will be gazetted as an isolation area. Just last night (April 16), the Ministry of Health noted that there have been 222 additional cases linked to the cluster at the premises, which typically houses 13,000 workers within.

Though local activists and non-government organisations have previously raised concerns about the dormitory’s conditions, the main point argued by the Zaobao forum writer was that the migrant workers had themselves to blame.

Positing that it is due to cultural and lifestyle habits that the migrant workers are living in filth, the writer cited an example in which a supposed friend had to deal with severe pest issues after renting out her apartment to migrant workers.

“Finger-pointing and criticism are easy to do. Aren’t migrant workers also to blame for this huge rise in Covid-19 cases?” she questioned.

“Instead of blaming the government, why not assume some personal responsibility. There is no government that can have a perfect pandemic management policy, and the Singaporean government has already done a very good job.”

Since reports about the unsavoury accommodations emerged, the Ministry of Manpower has since started working with dorm operators to resolve issues.

The letter was translated and shared by local writer and Harvard student Yong Han Poh on Facebook, where it was widely reposted out of rage. 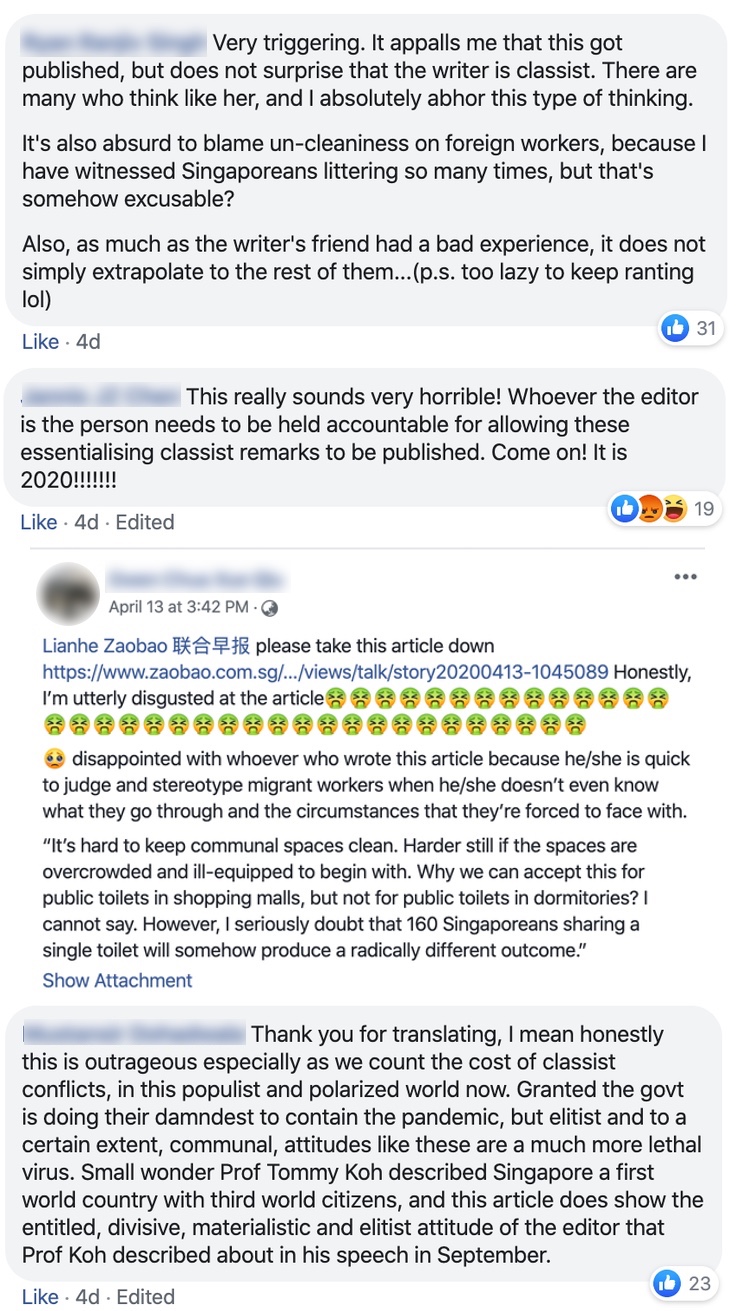 Following the outrage, the editor of Zaobao's forum section defended the decision yesterday (April 16) to publish the divisive piece on grounds that the national newspaper holds “duties to [their] readers to reflect different viewpoints in society”.

Acknowledging that the article has attracted “much attention and discussion”, the editor argued that publishing it will allow people to “know the innermost thoughts of how other people regard migrant workers,” and how other readers have the same opportunity to contribute to the discussion.

‘What I need to emphasise is, these essays do not represent the views of this newspaper, and the forum letter I referred to above is not the work of a journalist here,” explained the editor, whose words were translated and shared again by Poh on Facebook.

The condemned forum writer then received a few responses which were also published on Zaobao.

In a letter of response written and shared on Facebook by Michelle Sim, she urged the original writer not to be prejudiced against migrant workers and points out the “baseless accusations” made by the author.

Sim explained how the subpar standards of living at such dormitories are beyond the control of the workers, who are forced to stay in cramped spaces.

“Maybe when the author was expressing her opinion, she did not consider if the workers had a choice to begin with. Many people have negative stereotypes of the workers, such as being low-class, not observing personal hygiene, and sleeping on the ground,” she wrote.

“We should instead question ourselves, do these superficial conclusions really represent the whole migrant population? This sort of sweeping generalisation is very irresponsible.”

Another letter of response that went viral on Facebook was translated and shared by arts and film journalist Alfonse Chiu. Submitted by Ong Chang Woei, the writer similarly criticised the original author for the “bigoted statements” which chillingly point out the “unbridled send of superiority expressed over the ethnicity and culture of our migrant workers”.

“The dilemma that our migrant workers are facing today is a result of structural class disempowerment that sprung from a global capitalist order,” asserted Ong.

“If we choose to not tackle this problem head-on and instead choose to relegate and blame the reasons for the poor living conditions of the migrant workers on their poor upbringing, and their culture in turn, then it is indisputably racism.”