A romantic comedy titled It’s Okay To Not Be Okay, which revolves around the love story between an anti-social children’s book writer and psychiatric ward caretaker will be his first drama in five years.

Here are 10 things to know about the top Hallyu actor who is fronting the drama alongside actress Seo Ye Ji.

He has a lot of awards under his belt

Soo-hyun is no stranger to award ceremonies and has won numerous acting, style and popularity awards throughout his career.

He was also awarded the Grand Prize (Daesang) consecutively at the 7th and 8th Korea Drama Awards for My Love from the Star and The Producers.

Due to the success of his dramas, Soo-hyun has endorsed a staggering number of products. When he starred in Moon Embracing the Sun, he had his face on 17 different products ranging from restaurants to beer to electronics devices at the same time.

When My Love from the Star exploded in popularity through Asia, he had an astonishing 35 local and international endorsement deals in 2014 alone.

He was stationed at the DMZ during his military

Read Also
Watch: Kim Soo-hyun and cast talk about new Netflix K-drama It's Okay To Not Be Okay 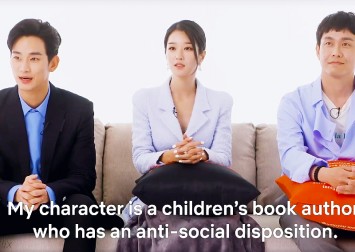 Although Soo-hyun has a pre-existing heart condition and was originally designated as a public service worker, he went through an additional physical examination to be cleared for active duty.

An outstanding trainee during his basic training, he was assigned to the 1st Reconnaissance Battalion, which is stationed at the DMZ or demilitarized zone between North and South Korea.

Part of his duties included patrolling the area while looking out for enemy ambushes and searching for active land mines. He even received an early promotion as a Sergeant for his exceptional conduct.

He got into acting to overcome his shyness

During an interview with People magazine when he was in Los Angeles to attend KCON LA in 2015, he revealed that when he was young, his mother suggested for him to attend acting classes as he was an introvert.

Acting in a play made him feel like he became a different person, and when he felt ecstatic upon hearing the audience’s applause, he knew he wanted to become an actor then.

He is good friends with IU

Soo Hyun worked with singer IU on the hit dramas Dream High and The Producers and they have remained good friends. After his discharge from the military, he made a cameo on Hotel del Luna to show his support for her and director Oh Choong Hwan who worked with him on My Love From The Star.

He also acted in IU’s music video Ending Scene and she made a cameo in his movie Real. Recently, he sent a coffee truck to her movie set Dream, where she is currently filming with Park Seo Joon.

He financed his own movie

Soo-hyun’s last movie was Real in 2017, an intense neo-noir action film that was financed by the star and directed by his cousin Lee Sa Rang.

It starred himself and the late Sulli who was formerly from girl group f(x). Although reviews were mixed in South Korea, it got positive reviews in Taiwan and even had the highest initial week box office take for a Korean film at the time.

The film also boasts cameos from well-known stars such as Bae Suzy, IU, Park Seo Joon and many more.

He has a great voice

Soo-hyun studied song and dance for 3 months at JYP Entertainment, home to famous K-pop groups TWICE and Got7, for his scenes in the popular musical teen drama Dream High.

Playing a country bumpkin with singing talent who enrolled into a renowned performing arts high school, he was the only idol in a cast of K-pop idols such as Suzy Bae, IU and 2PM’s Ok Taec-yeon.

He even showed off his singing chops on good friend F.T Island’s Lee Hong-ki’s radio show Kiss The Radio when they sang F.T. Island’s Wind.

He almost became a professional bowler

One of Soo-hyun’s biggest passions is bowling. He progressed to the second round of preliminaries at a professional bowling tryout in 2016.

Showing off his bowling skills and personal equipment on an episode of Infinite Challenge, he shared that he likes bowling because when you bowl, you only have to compete against yourself.  He has also been spotted bowling when he was on military leave.

Although he is a well-known left-hander after fans spotted him signing with his left hand at events, Soo-hyun trained hard to use his right hand for the drama My Love from the Star.

He showed off his efforts by writing and eating with his non-dominant hand in the drama. He can now use both hands comfortably and even bowls with his right hand.

He gave himself an adorable nickname

When Soo-hyun guested on an episode of variety show Running Man, cast members Yoo Jae-suk and Lee Kwang-soo asked him if he had a nickname.

Soo-hyun sheepishly answered that when he was in primary school, his feminine-sounding name bothered him a lot, so he changed it to Soo-man to make it sound more manly.