When the line between admiration and obsession is blurred, you have Yang Lijuan — the crazy fan of Heavenly King Andy Lau who made headlines in 2007 when her unhealthy fixation led to her father's death.

While Yang, 40, has insisted through the years that she doesn't know what went wrong and she's not fully to blame for the tragedy, she has done a 180 in a recent interview with Chinese media.

The Chinese fan, who was 28 then, has been a big fan of the idol for 12 years and all she could think about was meeting him. She even dropped out of school to chase her dreams of meeting Andy.

To help her realise her dream, her parents exhausted their savings and sold their house. Her father even tried to sell his kidney to a local hospital but was rejected because it was illegal.

Eventually, Yang managed to get an invite to Andy's birthday party (which was organised by his fan club) on Mar 25, 2007, but was left feeling disappointed because she only got a few minutes to take a photo with him and didn't manage to talk to him.

In response to Andy's perceived coldness towards his daughter, the elder Yang took his own life by drowning himself and left a 12-page letter to Andy chiding him for his behaviour and said it was up to the star to arrange a private meeting with his daughter.

He was only 68 at the time of his death. 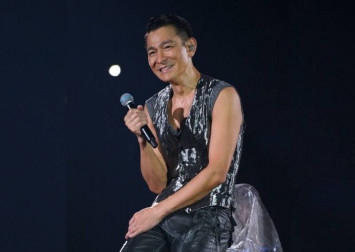 In an interview with Chinese media on Monday (Nov 4), Yang finally admitted that she was wrong and she would live life differently if she could.

She said: "If I could live life again, I wouldn't make the same choices."

When asked if she was sure, Yang reaffirmed her response before falling silent.

Yang also revealed that her temper has mellowed through the years and she has been remorseful for her actions. Every year during the Qing Ming Festival, she pays her respects at the river where she scattered her father's ashes.

In the video, she can be seen throwing chrysanthemum flowers into the water and said: "Father, your daughter is here to see you. Your daughter knows you made a lot of sacrifices for her. Mother and I are both doing well. I will take care of mum and you're the best father.

It was reported that Yang now works at a supermarket in Lanzhou and while she doesn't earn much, it's enough for her.

"It's been so many years since the incident and after all this time... I feel lucky that God didn't abandon me. I feel grateful every day," she said.

#celebrities #Andy Lau #In Case You Missed It