BANGKOK - Two Thai fans were charged with trespassing Wednesday (Sep 19) after they impersonated customs officials and sneaked into Bangkok's Suvarnabhumi Airport - all in an effort to meet South Korean movie star Lee Jong-suk.

The women, whose names were not disclosed, entered the restricted zone of the airport on Sep 14 using security passes they obtained in a risky attempt to meet the celebrity.

All went according to plan until one of the women detailed the derring-do exploit on Instagram, raising concerns about airport security.

Thailand receives about 35 million tourists a year and the airport is its busiest hub.

Camera footage shows one customs official handing the pair security passes and leading them to the prohibited area where Lee was due to arrive. 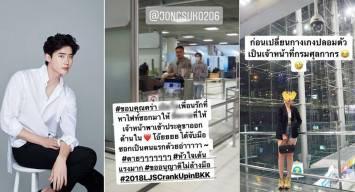 "The two women are now charged over trespassing while two officials are wanted for helping them to commit the crime," airport police chief Viroj Tudso told AFP.

If convicted, they face fines and possible jail terms of up to five years.

One of the women facing charges had thanked her friend in a post for helping find the actor's flight details and another person for leading her to the inner departure gate.

She also described the ruse, in which they wore outfits that made them look like customs staff, and said she was thrilled when it worked.

"I was the first person to shake hands with (him)," the woman said. "I won't wash my hands."

An airport representative said stricter rules on staff security checks would be implemented in response to the embarrassing breach.