You know the 7th lunar month is here when you smell acrid smoke in the air as believers burn kim zua (paper offerings). Another staple during this period is of course the exchange of ghost stories.

And this time, we have compiled some bone-chilling supernatural tales that might scare the bejesus out of you.

The Hong Kong actor was on a work trip in China when he ran afoul of the paranormal. The 60-year-old told Oriental Daily that his hotel room was haunted because there were strange happenings the night after he checked in. He said: "I went to the washroom after I woke up... then I heard the sound of something tearing, like a zipper. I thought it was the television so I didn't think much of it.

"After a while, I heard the sound again and I went to check, and the channel on the television had changed to the NBA [game]."

He added that the hair dryer stopped working while he was using it, only to start up again after he had set it down. Bobby also felt prickly sensations, as if there was an Eno antacid powder drink bubbling inside him.

The veteran actor added that he pleaded out loud to the beings to give him 15 minutes and he'd leave. The incident left him feeling scared but fortunately, whatever was haunting him didn't follow him back to Hong Kong.

She may have had two strange encounters, but Hong Kong actress Mimi Choo wasn't about to go down without a fight.

The Malaysian-born artiste told Shin Min Daily News that her first brush with the supernatural took place at a five-star hotel in Toronto. While showering, Mimi was shocked when the tap suddenly turned on on its own. She got the hotel staff to look at it, but it was fine.

However, whenever she entered the washroom, the tap would turn on automatically. She said: "I wanted to 'fight' it. I wanted to see what it could do to me." Though she had goosebumps, she didn't change rooms and stayed there for another six days.

Her second encounter was a little more dangerous. She was in Montreal for two nights and while she was drying herself after a shower, she felt a sharp pain on her right arm and saw three scratch marks on it.

Mimi thought she could have accidentally injured herself while wearing her clothes. The next day, she found three more scratch marks on her left arm. The brave one said she remained unfazed after a moment of panic, and refused to be scared further by whoever was hurting her.

Speaking to DJ Dennis Chew on local radio station Love 972fm, local actress Chen Xiuhuan recounted an incident where she was harassed by a ghost in her house to the point where she had a breakdown.

Besides hearing unexplained footsteps, she also had the feeling of someone sleeping next to her, and someone tugging on her clothes in the middle of the night. Once, she felt someone sitting on her; she tried calling out to her sister for help but couldn't. 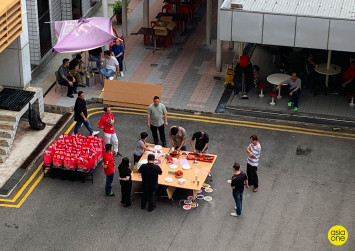 She didn't tell her family about any of it and she finally broke down when her family left her alone in Singapore while they went on a trip.

Xiuhuan, 54, said: "I was scared awake by the sound of footsteps, and I clearly heard laughter. I was shaking under my blanket and I held in there till daybreak to ask for help."

Unable to tolerate it, she packed some clothes and stayed over at the television station but couldn't fall asleep for the next few days. Every time she closed her eyes, she would find herself crying. Finally, one of the directors introduced her to a Taoist priest who performed rites in her home.

"The priest said there was a child following me and they didn't mean any harm. They just wanted to play. [The priest] believed that the spirit was already in the house before we moved in," she revealed.

The Hong Kong singer-actor had a couple of run-ins with the supernatural and one of them was potentially fatal. It was reported in Hong Kong media that the 52-year-old once gathered a group of production crew members to play a war game in TVB City.

There were eight people in the group, including Ekin. However, when they did a headcount after they finished the game, they counted nine. The group dismissed it as someone playing a prank, but when they did another headcount shortly after, there were still nine people.

Another time, Ekin was in TVB City resting on the floor when a lamp from up high dropped on the ground next to him. A colleague who had the ability to see ghosts told him that they saw a 'woman' sitting on the lamp before it fell. Ekin added he now says a quick prayer whenever he enters the studio.