Patrick Tse's latest appearance has sparked concern over his health, after he was spotted with a 'crooked mouth' at the 40th Hong Kong Film Awards (HKFA), some media outlets reported.

At the ceremony held on Sunday (July 17), the 85-year-old became the oldest recipient of the Best Actor award for his role in the black comedy Time.

He received a standing ovation for the win, which also marked his first nomination at the HKFA in a career that spans 70 years.

Audiences at home, however, were concerned when Patrick removed his mask to give his speech.

They noted that his lips on the left side of his face appeared droopy and are concerned that it might be a sign of a stroke, reported 8World.

However, Patrick's good friend, fellow veteran actor Bowie Wu, put the rumours to rest. Responding to reporters on Monday, Bowie denied that Patrick is in ill-health.

"What's wrong with him? We just had tea together two weeks ago," Bowie said, rubbishing reports that Patrick had suffered a stroke.

When asked if he congratulated his friend on his win, the 90-year-old stated that he'd only learned about it that morning and would be giving Patrick a call later in the evening.

Asked if he intends to break Patrick's record as the oldest award winner, Bowie laughed and said: "No, Fourth Brother [referring to Patrick] is a terrific actor. When it comes to singing, I've already broken the record for the oldest singer to stage a concert!" 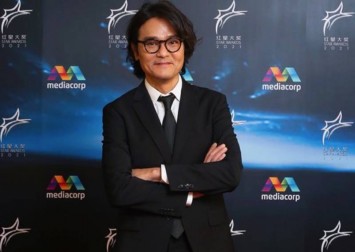 Besides the online chatter over Patrick's appearance, his son, actor-chef Nicholas Tse, also drew flak for being absent during the momentous occasion. Instead, netizens noted that it was actor Gordon Lam who was Patrick's 'human walking aide' and the one caring for him throughout the entire ceremony.

Gordon is also one of the screenwriters for Time.

But being out of sight doesn't necessarily mean out of mind.

According to Sinchew Daily, Nicholas, who is currently in Beijing, congratulated his father on social media after the win was announced, and posted another congratulatory message the next day.

He wrote: "Daddy won the best actor award, of course I'm very happy for him. Thank you to all his fans for their love and support for the past 60 years. He won a lifetime achievement award last year, and then now best actor. He must be very happy!"