Actor Jussie Smollett's character is being removed from the final two episodes of Fox's hip-hop drama Empire after he was arrested and accused of staging a hoax hate crime attack on himself, show officials said on Friday (Feb 22).

The move came a day after the 36-year-old was charged with lying to Chicago police about the allegedly staged incident, in which he said two masked men beat him and slung a noose around his neck while yelling racist and homophobic abuse.

Smollett faces up to three years in prison if convicted in the case, which fueled political divisions that have roiled the United States since Donald Trump's 2016 election.

Smollett's character, Jamal Lyon, will be removed from the final two episodes of the current season of Empire, according to 20th Century Fox Television, which said it wanted to avoid "further disruption" on the set of the popular show. 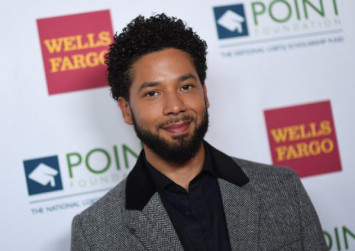 "The events of the past few weeks have been incredibly emotional for all of us," the show's co-creators and producers said in a statement.

"While these allegations are very disturbing, we are placing our trust in the legal system as the process plays out."

Lawyers for Smollett did not respond to a request for comment on Friday.

According to police, the actor, who is black and openly gay, paid two brother US$3,500 (S$4,700) to attack him on Jan 29 in the hope of advancing his career and because he was unhappy with salary.

Police did not spell out how he hoped to boost his salary by staging such a hoax.

While the actor initially received an outpouring of support on social media, others were sceptical about the attack, which he said took place outside his Chicago apartment at 2am on a very cold night.

Trump responded on Thursday after Smollett was charged, tweeting: "(W)hat about MAGA and the tens of millions of people you insulted with your racist and dangerous comments!?"

.@JussieSmollett - what about MAGA and the tens of millions of people you insulted with your racist and dangerous comments!? #MAGA

Trump's critics have said his rhetoric has fuelled racism and violence, while his supporters say the press has unfairly cast Trump and his supporters in a bad light.

The Walt Disney Company secured a US$71 billion deal in July to acquire 21st Century Fox's film and television assets, which means Empire will belong to the production company.