​​​​​The cast of Ah Girls Go Army met local reporters at a press conference today (Jan 28) at Park Royal on Beach Road hotel, where they shared some anecdotes from filming.

Apple Chan, who plays Lieutenant Roxanne, was unable to attend due to other work commitments.

As the film is about girls undergoing basic military training, the cast members — most of whom have never been through National Service — had a brief taste of what our local boys go through while serving the nation, including going on outfield missions.

Veracia Yong, who plays recruit Peh Mani, revealed that she actually fainted twice during the filming of the movie due to heat injury.

The first time was when they were filming an outfield scene, where the characters are in the full army gear under the hot sun.

According to her co-stars, even though Veracia already looked pale, she pushed on with filming because nobody had asked for a break.

Veracia told AsiaOne: “I felt guilty because a few of them cried. I remember the first time I had heat injury, it was really sudden.

"And then everybody crowded around me. When I woke up around one to two hours later, I told them I was fine but they were all so sad and worried about me.” Some of the actresses said that Kele had broken down immediately in tears.

Xixi also added that the incident was a wake-up call for the rest of them. "We kept checking on each other, and not be shy to say 'I cannot'."

The second time Veracia fainted was, weirdly enough, partly because she laughed too much.

The girls were rehearsing a scene under the sun in the forest. Malaysian actress-host Kele – who, like her character Princess See, is not proficient in English – had to say an English word in the scene but her offbeat pronunciation left her co-stars very amused. 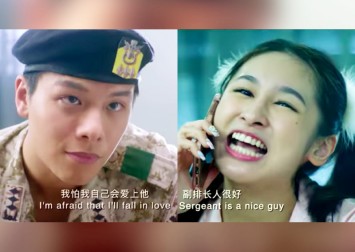 Kele recalled: “Veracia laughed and said she felt breathless, and the next moment, she was in the ambulance."

Thankfully, the medics on set ensured that she received prompt treatment.

Ah Girls Go Army is a comedy set in an unforeseen future where there are not enough males in Singapore and females have to step up to serve National Service.

The story focuses on the first batch of recruits hailing from different backgrounds who undergo basic military training under Sergeant Chow (played by Glenn Yong) and Lieutenant Roxanne.

As a unit, they overcome hardship and their initial resistance to serve, and use their newfound abilities to solve and mend relationships in their personal lives.

The movie premieres in cinemas on Feb 1.