The film, which opened in cinemas just two days prior with sneak previews from Jan 28, was played on 119 screens over 36 theatres. It is also showing in Malaysia.

Ticket sales here have already surpassed every Asian release last year, except for The Diam Diam Era Two, which was another Jack Neo vehicle.

The 62-year-old director is understandably delighted at the good box-office takings, especially during a pandemic, but the movie isn't without its critics.

Some local film reviews took issue with what they say are regressive portrayals of women, bad jokes, fat-shaming and excessive product placements.

Still, box office aside, some movie-goers have said they enjoyed watching AGGA.

What makes a film entertaining is ultimately "an individual thing", Kenneth Tan, the president of the Singapore Film Society, told AsiaOne. 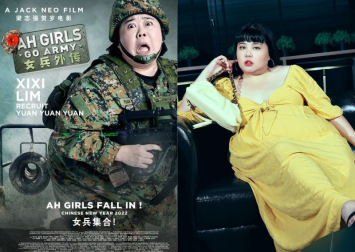 "The reviewers have their prerogative to write what they want, and the movie-goers have, of course, the absolute prerogative to vote with their money.

"If they've watched something and they don't like it, they are fully entitled to say how they feel. I do think, though, that it is good that people keep an open mind," the 57-year-old said.

"If you read a review that is either really positive or really negative, keep an open mind. If it's something you want to watch, go watch it and then decide for yourself."

He offered another perspective: "Especially during the festive period, if a filmmaker from any part of the world makes a film that uplifts people and that tickles their funny bone because it's about something that's very close to their heart and their culture, I say, so be it. We actually need more of such films."

What about subsequent debate that AGGA's box-office success shows how 'unsophisticated' some Singaporeans are and how the local movie industry hasn't been able to improve? 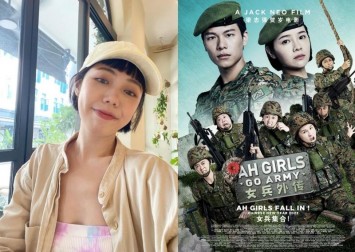 Kenneth believes that one sign of an industry getting better is that it must be profitable; another is whether the film is sold to other territories.

"Whether audiences are sophisticated or unsophisticated, to me, it's not about what types of movies they buy tickets to watch.

"Maybe we can talk about sophistication, or the lack of it, in other ways. Are we open-minded enough to watch all kinds of content? So if somebody would watch, you know, mainstream mass-entertainment films as well as something that's considered high art, to me, that is sophistication."

Ah Girls Go Army tells of a future where dropping birth rates mean Singaporean females have to step up to serve National Service.

The story focuses on the first batch of recruits hailing from different backgrounds who undergo basic military training under Sergeant Chow (played by Glenn Yong) and Lieutenant Roxanne (Apple Chan).

Posted by JackNeoCK on Thursday, February 3, 2022