Amber Heard has denied reports her role has been cut from Aquaman 2.

According to Just Jared, the actress, 36, was to have her US$2 million (S$2.8 million) role in the sequel recast.

The report came hours after Heard repeated her allegations of abuse against ex-husband Johnny Depp, 58, despite being found guilty of defamation for accusing him of sexual assault.

But Heard's team told Entertainment Tonight on Tuesday (June 14) it was untrue.

A spokesperson said: "The rumour mill continues as it has from day one — inaccurate, insensitive, and slightly insane."

Just Jared had reported Heard — who has already completed filming on the sequel to the 2018 sci-fi movie in which she starred alongside Jason Momoa, 42, and 54-year-old Nicole Kidman — was officially dropped from the cast after Warner Bros "screen-tested the movie".

They were said to have become concerned about the feedback for the film, due out in December, and concluded Heard's scenes should be reshot with another actress.

"They are going to be doing reshoots with Jason Momoa and Nicole Kidman."

An online petition to get Heard dropped from the sequel was also started towards the end of the legal proceedings, attracting almost five million signatures in a matter of weeks. 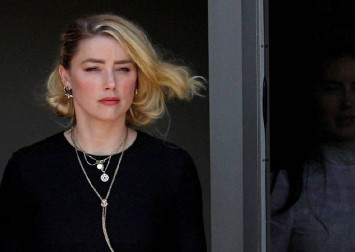 He added in court producers had to "fabricate" a connection between the actors.

Hamada also said that the delayed announcing Heard's role in the sequel for weeks due to "conversations about recasting".

He said about Heard and Momoa on screen: "Editorially they were able to make that relationship work in the movie.

"There was a concern that it took a lot of effort to get there."

Heard again publicly accusing her ex-husband Depp of physical abuse — which he strongly denies — during an interview with the Today show.

She insisted she will "stand by every word of her testimony" until the day she dies.

Heard also accused jurors in the trial of being tricked by her Pirates of the Caribbean star ex-husband due to him being a "fantastic actor"— after Depp's lawyer accused the accused of putting on a "performance" during her testimony.