In a press conference held on Saturday (Feb 20), Leung said he looked forward to filming the new movie, whose Chinese title translates to Gold Finger, with Lau.

"I feel very excited and happy, as we have worked together, from television to movies," he said. "Actors develop rapport after many collaborations, and I believe it will be the same this time."

Lau also felt the same way. He said: "After reading the script, I feel that Tony Leung is the obvious choice to act against me."

Leung and Lau have worked on several TV series together, most notably The Duke Of Mount Deer (1984), a TVB adaption of the novel of the same name by the late Louis Cha. In the series, Leung played the illiterate but smart protagonist Wei Xiaobao, while Lau played Emperor Kangxi.

Leung will soon be appearing in the Marvel movie Shang-Chi And The Legend Of The Ten Rings, while Lau is in in movies such as Shock Wave 2 (2020) and Endgame (2021).

Gold Finger will be directed by Felix Chong, who is one of the screenwriters of the Infernal Affairs trilogy and recently won Best Director at the Hong Kong Film Awards for crime thriller Project Gutenberg (2018), which starred Chow Yun Fat and Aaron Kwok. 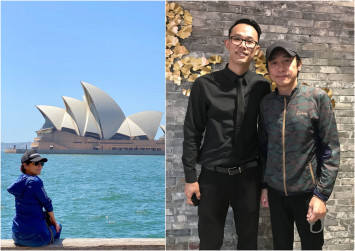 However, the actors at the press conference remained tight-lipped about the story and their roles in the movie.

Chong would only say that it is an anti-corruption story set in the 1970s and 1980s, with Lau and Leung playing characters who are both friends and foes.

Leung gave more clues to the movie when he said he and Lau would reverse their hero-and-villain roles from Infernal Affairs.

At the same conference, Emperor Group chairman Albert Yeung announced that the company would invest HK$350 million (S$60 million) in the film, the biggest sum for a Hong Kong movie so far.

He said that it pained him to mention the figure, but he believed it would help boost the Hong Kong film industry during the pandemic, as all the scenes would be filmed in the territory.