Andy Lau to be a dad again? Rumours intensify after couple's appearance at daughter's graduation

Is a second child on the way for Hong Kong superstar Andy Lau and his Malaysian-born wife Carol Chu?

The couple's recent appearance at their 6-year-old daughter Hanna's kindergarten graduation ceremony yesterday (June 6) has fuelled rumours that the pair are expecting their second child soon. 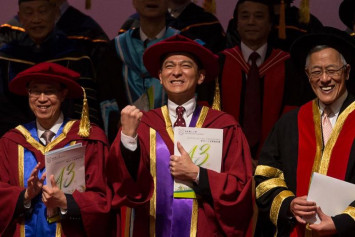 Although Lau had tried not to attract too much attention, there was an audible gasp from the seated audience when they stepped in after the performance had started. All phones and cameras also immediately turned towards them, reported Ming Pao.

The charismatic 56-year-old actor maintained a friendly expression and was spotted smiling and chatting with other parents. When Hanna was on stage, the proud dad eagerly stood up to get a better look.

Rumours of Chu's second pregnancy had swirled just last week, when she was spotted by photographers visiting her gynaecologist's office in Hong Kong.