Andy Lau says he hid marriage to protect wife; admits to being a bad lover

Andy Lau may be known for his suave and romantic leading-man roles, but being his wife is hard work, says the Hong Kong superstar.

Especially so when she has to put up with a man who is moody and reticent when it comes to showing affection, revealed the 57-year-old actor.

Lau opened up to Hong Kong radio DJ Vani last month, revealing the reason why he kept his marriage to Malaysian Carol Chu under wraps, and offered some insight into how he's like as a romantic partner.

Admitting that while he is direct and affectionate towards his family and fans, he is a completely different person when it comes to his girlfriend or wife - a trait which even he finds baffling. 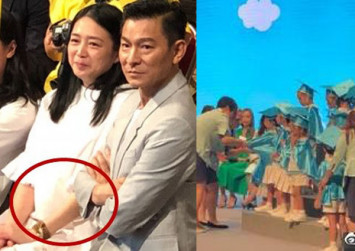 For example, he can buy a bouquet of flowers for a woman but will find it difficult to accompany it with romantic words.

Lau reasoned that because he's used to dramatic professions of love on screen, he finds such actions unnecessary in real life.

He admitted that any girl who chooses to be with him is quite a "poor thing", adding that he's someone who'd likely forsake his girlfriend if his friends needed him.

It may sound all gloom and doom, but there's a silver lining - the Heavenly King, who married Chu in 2008, stressed that he's a faithful man.

After years of playing hide-and-seek with the media, the couple are now proud parents to a daughter, Hanna, 6. There's even been rumours that Chu may be pregnant again, rumours which Lau has brushed off.

Since his daughter's birth, the famously private actor has relaxed his stance against paparazzi taking photos of his family.

In the interview, Lau shared that he actually didn't mind revealing who his other half was, but it was Chu who was uncomfortable with the idea.

"I just waited until she was ready, then slowly brought her out to face the media," Lau added.