Angelina Jolie: Diversity in the Eternals cast is 'how it always should have been'

Angelina Jolie says the diversity in the Eternals cast is "how it always should have been".

The 46-year-old actress - who plays Thena in the upcoming Marvel blockbuster - appears as part of a superhero ensemble featuring queer characters, people of colour and deaf actress Lauren Ridloff.

She told Variety: "What's really quite stunning is that when we walked out all of us together, it didn't feel like, 'This is so new and cool,' it felt like, 'This is how it always should have been'.

"Why did it take so long? It felt so right."

Jolie was asked why she feels it takes so long, and while she has "many things" to say on the subject, she focused on the idea that people should watch the film without actually focusing on its "diversity".

She added: "I could say many things, and I could go on for a while, but I think... it is so good to just bust a hole right in that...

"What I hope is that when people watch this film, they're not seeing it and saying, 'Oh, this is a film about diversity. This is a film that shows this person can be a superhero.' 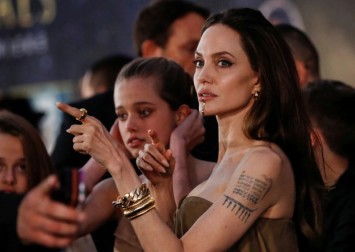 "And more shame on us for every questioning that they couldn't be because, 'Of course.'"

Eternals - which is set to hit the big screen next month - is written and directed by Nomadland filmmaker Chloe Zhao.