Angelina Jolie is in talks to star in Marvel's 'The Eternals'.

The 43-year-old actress could make her debut in the superhero realm if negotiations go well for the forthcoming film, which is to be directed by Chloe Zhao.

It's not known who Jolie is in talks to portray, but sources told The Hollywood Reporter that one part of the motion picture's storyline is expected to involve a love story between characters Ikaris, who is fuelled by cosmic energy, and Sersi, who relishes moving amongst humans.

Other details about the hotly-anticipated film are being kept under wraps, but it will be based on the Marvel comics by Jack Kirby in 1976.

Fictional species the Eternals are offshoots of the evolutionary process, and they were intended to be the Earth's defenders, which sees them do battle with the Deviants. 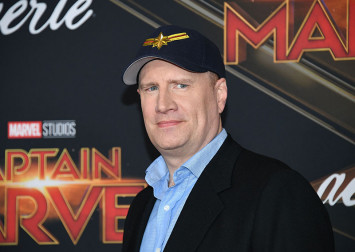 The motion picture will be Jolie's first superhero film, but she has starred in a comic book movie before, 2008's 'Wanted', an adaptation of Mark Millar and J.G. Jones series of the same name.

James McAvoy, Morgan Freeman and Terence Stamp also starred in the project, which was directed by Timur Bekmambetov and tells the story of an accountant who joins a secret society which his professional assassin father worked for.

Earlier this month, Marvel were said to be searching for an openly homosexual actor to play the lead role in the forthcoming film.

'Ruin' writers Matthew and Ryan Firpo have signed up to pen the script for the movie, and Marvel Studios' president Kevin Feige will produce the picture.