Anita Yuen and Julian Cheung's marriage is what many consider to be #marriagegoals.

However, the celebrity couple's journey was not always smooth.

On a recent episode of the Chinese talk show A Date with Luyu, Anita recalled her admission in 2007 that she was once the mistress to a rich married man.

The Hong Kong actress said she was willing to accept public criticism for the affair, but did not expect Julian would be hurt in the process. 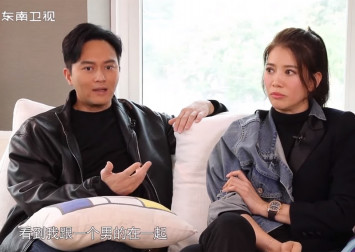 "My only regret was that I felt that I hurt him. I wanted to be honest about my life experiences. You could continue to come at me, as long as it's not him, not the person I love," said Anita as she tried hard to hold back her tears.

"I was naive then. I thought that if I said it out, some people would be able to understand me and know me better.

"I did something wrong and I was willing to bear the consequences, because I felt that you couldn't fool someone about this," the 47-year-old explained.

She had revealed the affair on the Stephen Chan talk show Be My Guest.

Back then, she had recounted, "Sending me 20 different flowers on my 20th birthday. I was so happy then. I guess this is what everyone would call materialistic. It blinded my eyes and I was unable to realise that he had a wife."

Anita truly believed the two were in a proper relationship and could not comprehend why the media labelled her a kept woman.

In the same episode, in which Julian also appears, Anita shared her biggest regret in life as well.

#celebrities #TV programmes #In Case You Missed It