Anna Kendrick has been "quietly" dating Bill Hader for the last year.

The Pitch Perfect actress reportedly struck up a relationship with the 43-year-old actor - who she starred with in Disney+'s 2019 Christmas movie Noelle - some time ago after being friends for several years, and things are going well between them.

A source told People magazine: "Anna has been dating Bill quietly for over a year. They met years ago. She's hosted Saturday Night Live and they've done a movie together, but they got together well after the movie.

"They are both very private people, and with the pandemic it was easy to keep it quiet. They're both hysterical so they must keep each other laughing all of the time. She's really, really happy."

Prior to finding love with Anna, Bill had been in a relationship with his To Do List co-star Rachel Bilson for several months until July 2020 and was previously married to that movie's director Maggie Carey, the mother of his daughters Hannah,12, Harper, nine, and seven-year-old Hayley.

Meanwhile, Anna, 36, previously admitted she has learned a lot from her past relationships and never viewed her old romances as "complete failures" because they had all had an impact on her.

She said: "I'm just so happy that I'm clearer now about what I will accept from people in my life. 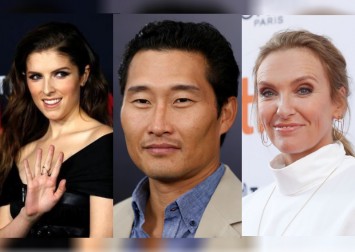 "The real arc that we wanted was to show how we learn from each relationship. Even though our relationships end, it doesn't mean they are complete failures. People come into your life and you grow and they change you, and what you learn from them might be really positive or it might be negative."

And the Love Life star admitted she doesn't believe in "soulmates" when it comes to romantic relationships.

She said: "I don't believe in soulmates in any traditional sense for sure. Like, that word is kind of synonymous with 'the one.'

"There's many 'the ones' and if we're lucky we spend a long time with someone.

"I wonder if there are non-romantic soulmates. I mean, I would say that there's evidence that it's more likely that a soulmate is non-romantic.

"The best and longest relationships in my life are certainly friendships."