The 'Thank U, Next' hitmaker accidentally paid tribute to a tiny charcoal grill with the Japanese inking she had etched onto her palm earlier this week when she had meant to pay tribute to her new single '7 Rings', and although she's had the tattoo amended, fans have pointed out on social media the message still isn't right.

Ariana revealed she had been back to her tattoo artist to add more characters to her design after the first gaffe, but social media users pointed out the correction isn't exactly what Ariana had intended.

Whilst another added: "For anyone who wonders, it now says she has bbq fingers. The only way you get 7 rings is if you read from the top to the bottom and then left to right. (sic)"

Earlier on Thursday (Jan 31) the 'God Is A Woman' singer took to social media to share the updated ink. She wrote: "slightly better. Thanks to my tutor for helping me and to @kanenavasard for being a legend. And to my doctor for the lidocaine shots (no joke). (sic)"

She added on the Instagram post: "RIP tiny charcoal grill. Miss u man. I actually really liked u. (sic)"

Ariana admitted earlier this week she had made a mistake with the tattoo, which led to the word 'shrichirin' being etched on her palm. 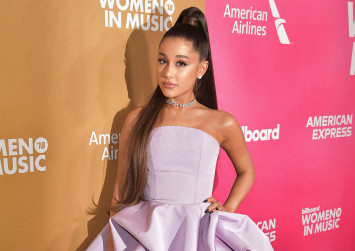 However, Ariana suggested she wasn't planning to have it amended because she claimed she wouldn't have been able to cope with the pain of having it made longer and wasn't expecting the design to stay permanently anyway.

Acknowledging the error on her Twitter account, she wrote in a now-deleted message: "Indeed, I left out [some characters] which should have gone in between. It hurt like f**k n still looks tight. I wouldn't have lasted one more symbol lmao. But this spot also peels a ton and won't last so if I miss it enough I'll suffer thru the whole thing next time (sic)"

And she admitted she liked the unintended message.