Think dragons and images of warriors, magic and fantasy come to mind. Fire breathing beasts with a strong presence, holding court and the attention of everyone.

The last thing you would ever think of though, is an Asian American actress playing the role of an awe-inspiring mythical beast. Well, neither could comedian and actress Awkwafina, when she got the call from Disney, to voice Sisu, the awkward but heroic blue dragon in Disney’s Raya and the Last Dragon.

“When I first got the call to voice Sisu, I was so mind blown. I almost didn’t believe it. I didn’t believe that this was a real call. Maybe they want to now but like, who knows if they still want me later?” said Awkwafina in an exclusive interview with Geek Culture.

You know, I’ve always connected with dragons – I was born in the year of the Dragon so I just think if I was ever gonna play an animal, it’s a cool animal to play.

Well, as disconnected it might have sounded to the 32-year-old actress then, the combination hit the right notes, just as when Eddie Murphy played the dragon in Disney’s animated Mulan. Awkwafina, born Nora Lum, brought her natural charm, along with endless jokes, laughs, and her signature raspy voice, to the role, carrying the movie like an espresso on a long busy day.

The end result is an impressive film filled with other Asian cast members that has found an audience not just among the Asia community, but around the world, winning positive reviews (read ours here) and adding a proud addition to the Disneý Princess franchise.

As a rapper, host, comedian and author, Awkwafina may have been in the entertainment industry for quite some time but it wasn’t until Crazy Rich Asianswhen the world became familiar with her unique stage name. After that all-Asian cast movie, which was filmed in Southeast Asia’s city-state, Singapore, Awkwafina has gone on to do other big Hollywood projects, including Jumanji: The Next Leveland Ocean’s 8.

Now, the New York born actress is back acting alongside yet another all-Asian cast including Kelly Marie Tran, Daniel Dae-Kim, Gemma Chan and many others for Raya and the Last Dragon.

For the cast, Raya and the Last Dragon is an exceptionally special film that empowers Southeast Asian children who often don’t see characters that look like them, but also characters that share similar cultural aspects like food, clothing and mannerism on screen. Although Awkwafina isn’t Southeast Asian, she wholeheartedly knows what this means for Asian representation in Hollywood.

“It feels incredible, in terms of the timing at which I came in the industry compared to, you know, [the people] I’ve talked to. I’ve talked to so many people, people I’ve looked up to, that have been in this industry for many, many years and their take on how it’s changed is a lot different from when I came in,” said Awkwafina.

ALSO READ: All you need to know about Raya and the Last Dragon Disney+ Premier Access

Issues of representation have always been an issue close to her heart. Especially since she knows what it’s like growing up and not seeing many people who look like her on screen.

The young Awkwafina only had one glimpse of representation that impacted her life when she was growing up and it was none other than comedian Margaret Cho. Cho later appeared in Awkwafina’s music video GREEN TEA in 2016 where they both critique racial and gender stereotypes associated to Asian women.

Asian representation in the 90s were scarce, with the likes of Charlie’s Angels Lucy Liu, teen Disney actress Brenda Song and martial artists Jet Li and Jackie Chan being some of the famous few. Now in 2021, as Awkwafina reflects, she feels lucky that she entered the industry at a time where diversity and representation aren’t much of a foreign concept as compared to the 90s.

“I think that movies really should reflect the way that our worlds are and it’s not doing us justice if they don’t so, it’s a really amazing feeling. And I feel very proud,” she continued.

Highly influenced by Southeast Asia, Raya and the Last Dragon sees the warrior princess Raya on a journey to find the ancient dragon Sisu. The two later team up and go on an action-packed adventure to destroy the evil forces that threaten the fictional land of Kumandra and restore love, trust and friendship in the region.

In essence, Raya and the Last Dragon follows the classic ‘format’ that makes Disney movies special and loved by viewers of all ages. To make a Disney princess movie specifically, you will need magic, friendship, an animal best friend and a big musical number. Mulan has Mushu, Jasmine has Rajah, and of course, Raya has Sisu.

Sisu’s character design is a pretty accurate take on dragons in Asian folklore where instead of thick and winged fire breathing dragons, the dragons are skinny and long. Despite originally being a non-human character, many have likened Sisu to Elsa of Arendelle from the Frozen franchise. After a much closer look, one can see why.

Both Sisu and Elsa fashion similar hues of blue with light-coloured locks. They both have tints of purple in their design and can manipulate water as part of their powers. Let’s not even start with the smirk-like smiles, up-turned lips and thin arched eyebrows atop big almond eyes that play a big role in expressing the character’s moods and emotions.

Not surprisingly, many have many the connection between dragon and ice princess, but the most surprising comparison she has ever received, was to the Genie from the 1992 Disney Princess film Aladdin.

“That’s a little bit of a too big compliment because people bring it up and I’m like, “What am I?” like how can you compete with Robin Williams as the Genie, that’s an iconic character!” stammered the bewildered actress.

“But they are big. They are both big and blue, so I could see that there.”

Fortunately for the youthful actress, bewilderment looks good on her because being compared to the late Robin Williams’ Genie wasn’t the only thing that took Awkwafina by surprise. The actress shared that she was confused when she saw earlier concepts of the film and thought she had been wrongly casted or was misinformed.

“When we went to D23 [Expo], we saw clips in it. It was the first time I saw any clips from the movie and it was rain coming down on Raya’s feet. You could see Raya’s feet and I was like, ‘Is this a live action movie? Did they not tell me?’ just because the animation was so good,” laughed Awkwafina.

Whilst Awkwafina stars as the last dragon in this new Disney princess movie, this certainly wouldn’t be her last appearance in the House of Mouse. 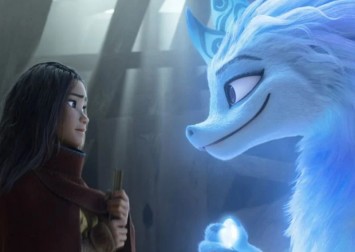 The actress was recently cast as the voice of the clumsy seagull Scuttle in the live-action remake of The Little Mermaid,alongside Grown-ish actress and singer Halle Bailey, who will be playing the role of the red-headed princess. In addition to The Little Mermaid, Awkwafina can also be seen in Marvel’s first-ever Asian-lead superhero movie, Shang-Chi and the Legend of the Ten Rings this July.

With everything looking up for Awkwafina, one role that fans have been clamouring for her to return to is that of Goh Peik Lin, in the sequel to Crazy Rich Asians. Unfortunately, the actress can’t share much about the future of Crazy Rich Asians, but she is incredibly keen to return to Singapore when the opportunity presents itself.

“I cannot wait to come and go back to Singapore so badly. I would eat Hainan chicken immediately! I would probably go to Marina Bay Sands – don’t tell anyone I said that, I think that would be a first stop for me,” chirped the actress.

I miss Singapore everyday and hopefully we get to get back soon, I can’t wait for it.

Disney’s Raya and the Last Dragon is out now in cinemas and on Disney+ with Premier Access.