Local actor Ayden Sng may have the bod but he doesn't like to flaunt it.

In the trailer's opening scene for his new drama The Unbreakable Bond, Ayden and co-star James Seah are seen lying topless next to each other on separate operating tables after an organ transplant.

Despite showing off his lean and well-toned figure, the Truths About Us actor admitted that filming that scene was "cold and incredibly awkward".

In an interview with AsiaOne last Thursday (May 5), the 28-year-old revealed that it's actually because he's never been fond of showing skin in front of others.

"I don't like to show skin in general," said Ayden. "I just find it strangely uncomfortable."

He added: "It's been like that since young. So, I don't like to do topless scenes and I pretty much avoid it as much as I can."

Even though James and Ayden both said the opening scene "wasn't a very flattering angle", they did find some solace in the fact that their characters aren't meant to be super fit or athletic.

"In our defence, that scene is actually shot in a way that is not very, very flattering," said Ayden. "I would like to think that our bodies are a bit nicer than that, but it is what it is."

He added: "Thankfully, we are not meant to be super fit in the show. [James' character] hasn't been able to leave the house in thirty years and cannot do any strenuous activity. And my role is just kind of like happy-go-lucky. He's not like a fitness buff or anything."

"In this case, I feel like we're basically using our character as a shield for not being particularly fit," laughed Ayden.

Ayden and James were speaking to us to promote their upcoming drama The Unbreakable Bond, which premieres May 16 on MeWATCH and Channel 8. The two play brothers, Gu Yunze (James) and Gu Yuncong (Ayden), who are heirs to a large medical group.

Yunze, who has been sick since birth, relies on Yuncong to donate his bone marrow and other organs to sustain his life. The pair meet Shiyuan (Chantalle Ng) at a nursing home and are quickly attracted to her, sparking a love triangle.

Shirtless scenes and awkward atmospheres weren't the only things Ayden felt uncomfortable with during filming.

There's a scene where Shiyuan and Yuncong are kidnapped by a bunch of thugs. Shiyuan's clothes are ripped off and she is assaulted while Yuncong is held back and beaten repeatedly.

In another phone interview with AsiaOne, Chantalle spilt the beans and mentioned that Ayden "was a wreck" on set, trying to cover her with towels and protect her despite being in tears himself.

Read Also
'It's about the kids': James Seah and Ayden Sng dive into 'dad talk' and adulting 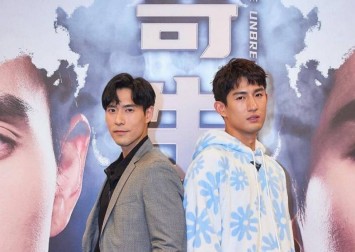 Being close friends with the actress off-screen, Ayden's emotions were a mix of his character's and his own during filming, he told us.

He said that for almost a month prior to filming the scene, they were all quite worried and had no idea what to expect.

"You just feel uncomfortable if one of your good friends had their clothes ripped off in front of you," shared Ayden.

"It's like a natural instinct to want to cover them up as much as possible and be protective because it's just a very vile feeling to see someone being forced against their will. I think that's why that scene is particularly powerful."

Co-star James said: "As fellow actors, I would say that we would always want to protect each other.

"So if you're feeling uncomfortable, you cannot give your best for the scene as well so we will always try to look out for each other and make sure that you're comfortable doing a scene before proceeding with it. "