Barbie Hsu buys 10,000 masks to send to Wuhan - and other celebs helping in fight against Wuhan virus

The Chinese New Year celebrations may still be going on, but the Wuhan virus has definitely cast an ominous shadow over it.

Which is why over the CNY weekend, celebrities have taken to supporting the cause to fight the virus.

In a Weibo post yesterday (Jan 27), Barbie Hsu's husband Wang Xiaofei revealed that the 43-year-old Taiwanese actress bought 10,000 masks that will be donated to Wuhan.

He wrote: "My wife is also a Taiwanese and she bought 10,000 masks in Japan. Today, we're sending it to a contact of mine in Wuhan and he'll help us to donate it. Moving forward, we will find more professional surgical face masks in Japan."

Another high-profile artiste was said to have contributed as well.

It was reported by Chinese media that Hong Kong actor Louis Koo donated RMB 10 million (S$1.9 million) to the Wuhan Benevolent General Association to help purchase medical supplies. However, when contacted by Hong Kong's Apple Daily, the 49-year-old's representatives said that they have "no comment".

Aside from Louis, Chinese artistes themselves have also banded together to support Wuhan.

Singer Han Hong, 48, organised a charity drive with celebrities such as actress Sun Li, actor-model Chen Xiao, and Taiwanese actress-singer Michelle Chen donating to the cause.

Additionally, Chinese actor Zhu Yilong, who is from Wuhan, was reported to have donated RMB 1 million to the Wuhan Benevolent General Association, but that wasn't the only thing the 31-year-old has done.

When a doctor in Wuhan posted about being on "24-hour standby" and how she couldn't join her family for the Chinese New Year, she tagged Yilong in the post and asked him for words of encouragement because she was feeling scared herself. The actor responded to her request and wrote: "You can do it! It's been hard on you. You have to protect yourself so you can help more people."

Meanwhile, a picture of a bank transfer statement led many to assume that Chinese actress Fan Bingbing also did her part for her country. The picture, which is circulating on Weibo, shows the actress' name and a transfer of RMB 500,000 to the Wuhan Benevolent General Association.

The statement was dated Jan 26. 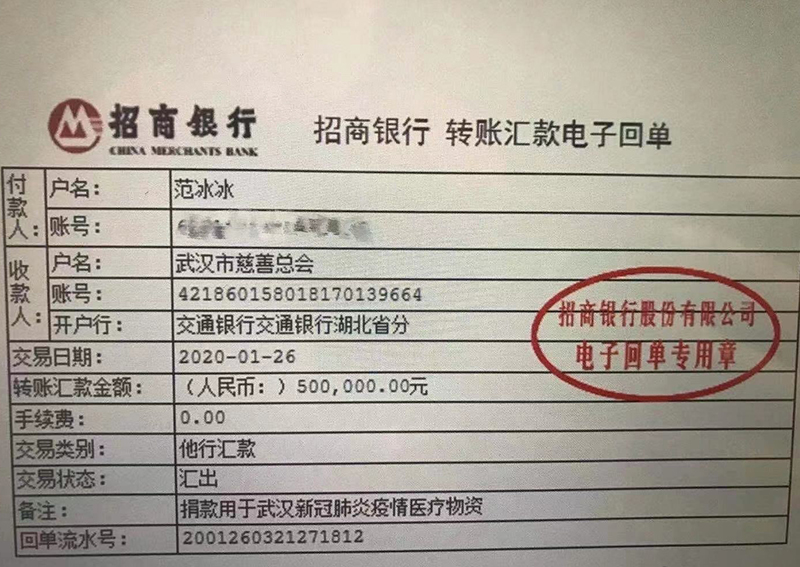