Local actor Benjamin Tan's mother has died, close to two years after the 53-year-old first slipped into a coma.

He paid tribute to his mum on his social media pages on Saturday (April 16).

"I hope I made you proud in this life. I hope I can still be your son in the next one.

Benjamin had described in 2020 how his mum had suddenly fallen into a coma in July as a result of a blood clot which was pressing against her brain stem.

She spent three days in the intensive care unit (ICU) and temporarily regained consciousness where she was able to speak albeit with some difficulty.

But her condition took a turn for the worse after complaining of a severe headache one morning and she fell back into a coma.

Doctors had discovered internal bleeding in her brain and told Benjamin and his father that she "could go at any time".

His mother had also been diagnosed with the autoimmune disease lupus several years earlier, which Benjamin suspected contributed to her condition. 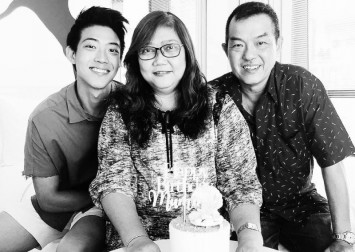 In an interview, Benjamin also shared with reporters that his mum's heart had stopped beating several times in 2020, once for 15 minutes. She was resuscitated successfully, but her condition deteriorated even further.

Benjamin, who's an only child, revealed then that he had told her, "if you're very tired, you can choose to let go if you want to".

"If she thinks that it is time, we will respect it," he said.

She was transferred from the hospital to a nursing home in April last year.