It came as a bit of surprise when Benz Hui's daughter Charmaine broke the news about her engagement. Not much was publicly known about her bae and how serious they are, after all.

Of course, once the happy couple announced the news, people were understandably intrigued and curious. Speaking to Shin Min Daily News on Oct 19, Charmaine, 24, said that her boyfriend is Shane Sim, a 26-year-old Singaporean who is getting his Master's degree in Hong Kong.

According to Charmaine, the pair met six years ago through mutual friends and they just couldn't stop talking. A few months after, she brought Shane home to meet the parents.

Things weren't always smooth sailing, though, and the couple broke up once due to differences in opinions. The split was amicable. But about two months later, they reconciled.

Charmaine said: "Maybe it was a test and both of us are fortunate to pass it."

She described her boyfriend as straightforward, kind, filial, loyal, responsible and most importantly, he loves her and her family. Charmaine said that most guys might want their own space with their girlfriends but Shane is always down to be with her family when he spends time with her.

"In my heart, family is irreplaceable and my fiancé might not be number one. He understands this and is able to love the people around me. Such a man is hard to find," she shared.

How Mary Hon and To Yin Gor helped with the engagement

As for the engagement, Charmaine revealed that it happened on Oct 17 and the couple had gone out to chow down on some Japanese cuisine and buy daily necessities.

Upon returning home, she suddenly saw TVB actress Mary Hon (her godmother) taking photos in her direction and her godfather To Yin Gor (Mary's husband) was also present. Shane then knelt and proposed with a yellow diamond. 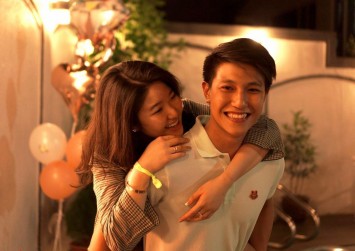 When asked if she was touched and cried, Charmaine laughed and said: "I was nervous and happy. We didn't cry because the whole thing was actually amusing."

The wedding date has yet to be set, but Charmaine said it "won't be too long". There will be a wedding banquet in both Singapore and Hong Kong due to their large number of relatives and friends.

For now, both of them are focusing on their careers. Charmaine will be opening two cafes in Orchard (possibly branches of her existing cafe business Bakeaholic) and one in Hong Kong, too.

Hong Kong media reported that her father Benz invested about HK$1 million (S$172,800) in Charmaine's cafe and Shin Min asked if the cost will be doubled since she's opening more branches in Orchard.

Benz replied: "There are some differences between the actual amount and what was reported. But I won't be sharing how much it actually costs."