It’s been screened at a few film festival events and recently in its home country Bhutan. Now, local film Honeygiver Among The Dogs will be premiering in Singapore at a Buddhist film festival this September.

In the past years, Thus Have I Seen Buddhist Film Festival (THISBFF) - which is into its 5th edition this year - showcased films about Bhutan and Buddhism. But this year is the first time that a film made by a Bhutanese filmmaker will be screened at the festival, scheduled to be held from Sept 22 to 29.

Director of Honeygiver Among The Dogs, Dechen Roder, is considered as one of the first female filmmakers in Bhutan. The 2016 film is her debut feature, which she merges spirituality and tradition, with the classic hallmarks of the film noir genre.

Honeygiver Among The Dogs revolves around detective Kinley (played by actor Jamming Jamtsho Wangchuk), who is sent to a remote region of Bhutan to investigate the disappearance of a Buddhist nun. He goes undercover and enters a risky alliance with his only suspect, a mysterious and alluring young woman named Choden (played by actress Sonam Tasha Choden), known to the villagers as a demoness. As Choden draws Kinley into her world, his supervisor takes him off the case, sending Kinley spiralling into delirium and nightmares.

Dechen has been producing short films and documentaries since 2004, most of which have screened on national television in Bhutan. Her short films have been featured at festivals in Hong Kong, India, Bhutan and Japan.

The 37-year-old, who will be travelling to Singapore to attend the festival, will also be holding a dialogue on Sept 23, with female Taiwanese filmmaker Lin Li Fang on overcoming challenges faced in making films with religious themes. 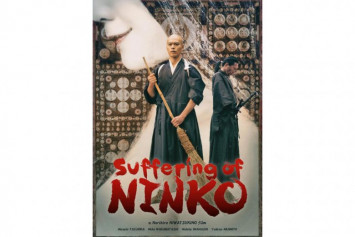 She said: "Growing up as a young girl in Bhutan, my mother told me stories of dakinis (female embodiment of enlightenment). But I was lucky. For the most part, in modern Bhutan, dakini stories don’t float around so much anymore, as the male lens ironically becomes stronger when it comes to stories of our past.

"When I actually met a woman who had the dakini essence, it was the first time that I realised the dakini stories are more than just paintings on temple walls or in old texts. They are real life stories of female strength, bravery, compassion and wisdom. Remembering and recognising the dakini becomes more and more important. For us as Bhutanese, as women, and as humans.”

BRINGING IT BACK HOME

Honeygiver Among The Dogs has been screened at different film festivals in various countries. In 2016, it was selected to premiere at the Busan International Film Festival. The film also made its debut at France's Festival du nouveau cinéma and Berlinale last year, and was also the winner of three awards at Switzerland's Fribourg International Film Festival last year.

Dechen's film has also screened in competition at many prestigious festivals in Switzerland, Poland, Hong Kong Taipei, Australia, Japan, among others.

While Honeygiver Among The Dogs has enjoyed success overseas, Dechen told Bhutan Times that she hopes to bring it home to more audiences in Bhutan.

"I am very happy with the success the film has had in the festival circuits but I also hoped to share the film with more Bhutanese audiences. I have already screened it in Thimphu, but still hope to one day get a chance to take it around Bhutan," said Dechen, who is already starting on her next film project "I, the Song".

After screening at THISBFF, Honeygivers Among the Dogs will be shown at a few festivals in the United States and Europe, said Dechen.

Honeygiver Among The Dogs will be screened on Sept 22, 6.30pm at Shaw Theatres, Lido in Singapore. Tickets sold at Sistic.