Buy Jay Chou's $35m Tokyo mansion and get to meet him in person - too good to be true?

Your eyes do not deceive you.

An advertisement for Jay Chou's luxurious Tokyo apartment was indeed floating around on social media platform Weibo on Monday (Aug 19).

The apartment is said to be in the Harajuku district with seven rooms that span over 7,700 sq ft and comes with a hefty price tag of 2.68 billion yen (S$34.8 million).

To provide some perspective, 7,700 sq ft is about the size of seven five-room flats in Singapore.

It was also mentioned in the post that the buyer would be able to meet the Taiwanese superstar in person to sign the contract.

Before you start whipping out your chequebooks to sign on the dotted line though, the veracity of the story has been disputed by Jay himself.

Shortly after the advertisement went viral, the singer-songwriter took to Instagram Stories to identify the culprit and rubbish claims that he was selling his apartment and meeting the buyer.

In Mandarin and in large, angry-looking font, Jay wrote: "Liar. Do you want me to catch you and give you a beating?"

The revelation had Weibo users joking about actually buying the house to meet Jay in person, and one even wrote: "I have already prepared the money and now you're saying this is fake?"

While there hasn't been any evidence that Jay actually owns a property in Tokyo (we won't be surprised if he does), it's been reported that he has a $27-million penthouse in Taipei that offers a 360-degree panoramic view of the skyline. 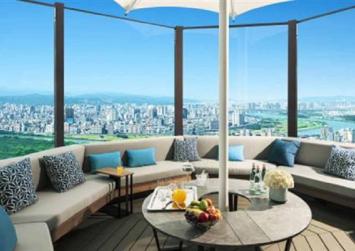 The double-storey luxury apartment is located at the Peace Garden condominium complex and is said to be one of Taipei's most exclusive residences.

Lianhe Wanbao even likened it to a museum and reported that the artwork in the hall alone was valued at over $4.6 million.

While the claims in the advertisement have been proven false, it is possible that there is a crazy rich Asian who was contemplating buying the property just to see Jay.

But perhaps one should consider a cheaper alternative?

After all, his concert tickets for Singapore have already gone on sale and all you need to pay is upwards of $198.

Besides, if you're willing to spend $35 million, you might as well ask for a private concert instead.

#Celebrity homes #Social media #celebrities #In Case You Missed It