Camila Cabello and Shawn Mendes have seemingly confirmed their romance after they were spotted kissing in San Francisco.

The 22-year-old pop star and Shawn, 20 - who have recently been romantically linked to each other - have been caught on camera kissing in a restaurant.

In the video, which has circulated on social media, Shawn is seen with his arms wrapped around the brunette beauty as he plants a kiss on her lips.

The smooch came shortly after the high-profile duo were spotted together in various locations over the last week or so.

In recent weeks, Camila has denied she is dating Shawn - although she admitted they have a "rare" relationship. 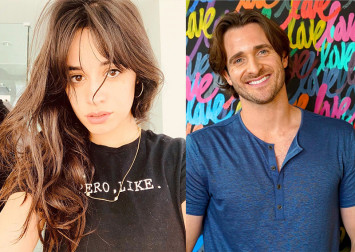 The former Fifth Harmony star - who previously collaborated with Shawn on the single I Know What You Did Last Summer - shared: "I've never had a lot of friends. I've always just had a few people in my life that I trust.

"I feel like it's so rare to meet someone in this industry and find a person of that quality, and I feel like Shawn is that person for me.

"I just trust him, and no matter the level of intensity that he has around his career or I have, he is just normal, and that is so rare and precious to find in this industry.

"To be able to hang out with someone and you don't really care that they're Shawn Mendes, you know what I mean?

"You're just people, and that is definitely something that is rare ... It's actually a really beautiful feeling to know that this person is always going to be in my life, we're always going to love each other."