From 'Carouheller' to hubby: Local actress Kayly Loh met her fiance online but it wasn't through a dating app

Barbadian queen singer Rihanna once sang "We found love in a hopeless place" and the pop singer might be on to something.

Local actress Kayly Loh, 33, announced her impending nuptials yesterday (Dec 13) and told 8days that the couple met through the unlikeliest of apps — Carousell.

While many find love on dating apps, Kayly and her soon-to-be hubby, identified only as J, knew each other through the e-commerce app and she even described him as "quite a 'Carouheller' (Carousell seller from hell)".

She recalled with a laugh: "He didn't want to budge on the price and he made me wait according to his schedule for weeks! And on the day we were finally supposed to meet, he wanted to change his plans again. I was actually quite annoyed."

After the transaction, the pair continued talking and Kayly also discovered that J, like her, drives a Land Rover Defender from the photos on his Carousell listings. Through their conversations, they discovered that they have a lot of mutual friends in the industry or who own the same vehicle.

According to Kayly, J asked her for a private flower arrangement class after finding out about her floral business and kept inviting her on pre-Covid road trips to Malaysia with their Land Rover club. She turned down the latter as she thought he was being "overly friendly".

When asked if he was already interested in her and finding ways to meet her, Kayly said she had her suspicions but J has denied it. 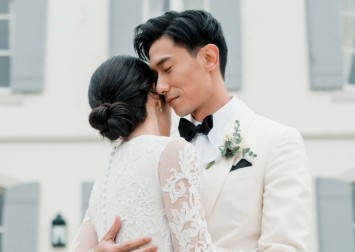 Her fiance popped the question a day after their first-year anniversary sometime in November last year. Alas, her proposal didn't turn out to be a well-kept secret.

Arrangements were made to have dinner with friends at 7pm that day, but she arrived early and saw his car. When she texted him about it, he said it was their friend's car and aroused her suspicions.

But that's not how she found out about the proposal.

She said: "He asked me to go inside the restaurant first, and when I walked in and told the receptionist that I had a booking under J's name, she said, 'Oh, they're over there preparing for the proposal', so I already knew it was going to happen."

As for why Kayly felt J was 'The One', she replied: "His sense of responsibility, how he treats his family, and how we have very similar values. All in all, our personalities are very similar as we are sort of in the same industry and have the same hobbies. He's practically my other half."

Wedding preparations are underway with their big day scheduled for later this month but Kayly confessed that they're both "a little too chill".

She said: "I only started panicking a bit last week when I realised how much I hadn't gotten done, which was mostly small things like printing thank-you cards and table numbers.

"I thought I'd be okay since I'm also a wedding florist so I'm quite familiar with how things go, but it hit me that there's a lot that I totally forgot. I think we're almost there but we're also quite chill, so if it goes south, then it goes south lor."

The bride-to-be didn't reveal the exact cost of the wedding except that it's a five-figure sum. She also hasn't got the budget for her floral arrangement "sorted out yet".

She added: "But it'll definitely be cheaper than what other brides would pay me. On average, one wedding usually has about $8,000 to $10,000 worth of flowers, so I will probably spend less than that."