Catfight! Claws out as Xiaxue and Oon Shu An fight over obesity 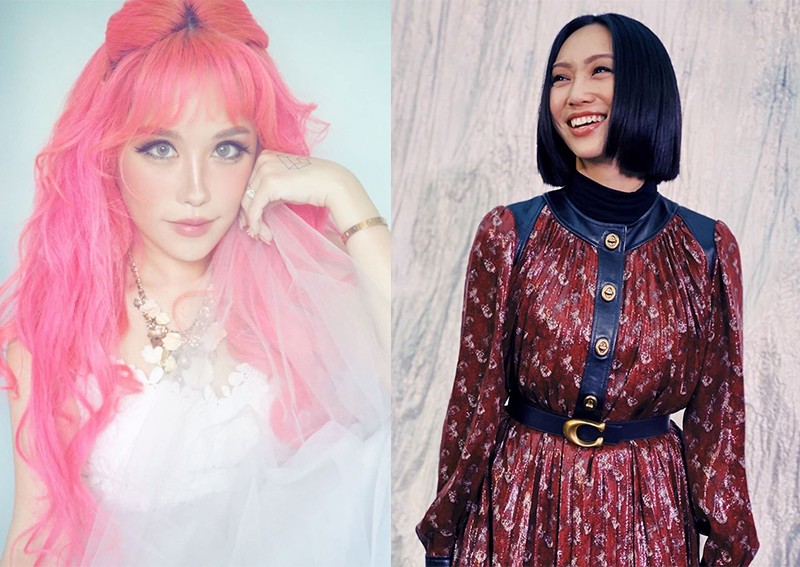 Is being big something beautiful or something to correct?

That's the question hanging over an online spat between local influencer Wendy Cheng (better known as Xiaxue) and local actress Oon Shu An.

In her latest controversy, 35-year-old Xiaxue faced major backlash over fat-shaming after she spoke out against glamourising people who are morbidly obese. It started with her calling Adele a hypocrite in an Instagram Story on Feb 14 — apparently triggered after the singer reportedly lost 45kg despite previously stating that her aim wasn't to be skinny.

Xiaxue also didn't hold back on Instagram, reposting a picture of plus-sized model La'Shaunae Steward. She wrote: "The morbidly obese (like this woman) should never be seen as attractive because death and disease isn't attractive full stop... F****** stop glorifying this s*** Instagram. Shame on you."

The Instagram Story was subsequently taken down after it was reported for harassment. She then made another Instagram post that doubled down on her contentious stance.

In response to Xiaxue's comments, Shu An, 33, shared a photo of Steward on Instagram and praised her for being beautiful and thanked her for "sharing [her] light". Shu An, who stars in her own video series on Clicknetwork like Xiaxue, argued that the media rarely glorifies fat people.

So should they ever get a chance in the spotlight to tell their story — and one that speaks to bullied overweight individuals who struggle to love themselves — she is "here for it".

However, Xiaxue didn't take too kindly to Shu An's sentiments and retorted on her post: "If she’s so beautiful why don’t you gain 150kg to go look like her? Practice what you preach."

The influencer added she wanted to drive the message that "clinically dangerous obesity should not be glorified" and that "their bodies shouldn’t be patronised as beautiful because it is dangerous".

"Nobody is saying don’t treat fat people like human beings or they aren’t deserving of love. Don’t try and skew the message here," Xiaxue asserted.

Refusing to let matters rest, Xiaxue posted some scathing Instagram Stories that accused Shu An of being a hypocrite. 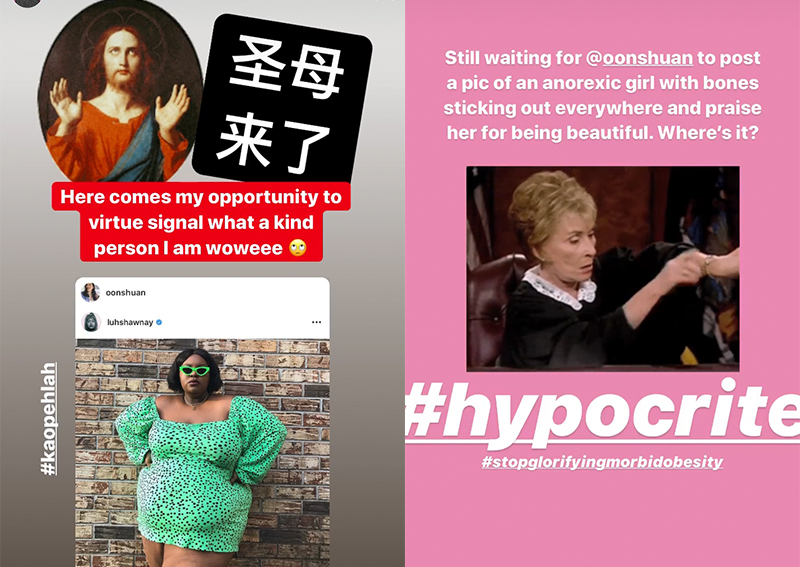 Shu An responded quite extensively, so we'll just sum up the key points:

Interestingly, both camps have garnered very vocal support, but some of Xiaxue's supporters had one glaring commonality — they offered little constructive debate. Instead, they simply became cheerleaders and parroted whatever she said.

[[nid:478299]]But perhaps Instagram user @peonysmacked had the right perspective as they pointed out that the health risks morbidly obese people face are undeniable, but it is not hypocritical for Instagram to allow these people to post photos of themselves.

"If her (Xiaxue's) entire argument is that the media and people generally should not be glorifying morbid obesity as it encourages people towards bad habits and poor health while in the same breath taking no issue with unnecessary elective surgery (and yes, the glorification of it), where the health risks are just as severe and where such risks are similarly undertaken of one’s own accord, then don’t lecture others about being hypocritical or pretend that this is some public service she’s doing," they wrote.

What the user took issue with was Xiaxue's method in raising awareness on the issue, admitting that both Xiaxue and Shu An make good points but "only one is being deliberately provocative and judgmental".