“We’re so reliant on data and Internet that any disruption to it can really upturn our lives. But be wary of scammers preying on our need for connectivity,” highlighted Singaporean actress Joanne Peh via an Instagram post on Tuesday (Oct 20).

This comes after Peh received an unsolicited phone call from a scammer who claimed to be a staff from a Singapore telecommunications company.

In the rest of her post, the mum-of-two recounts her experience as she seeks to inform the public about the scam that has been happening.

Peh said the alleged Singtel staff informed her that there was a disruption to her Internet connection. She was also instructed to switch on her computer immediately.

That was when Peh responded saying that she was not a Singtel subscriber. Despite so, the caller did a cover-up of the scam, explaining that Singtel owns “the infrastructure regardless of which Internet provider [Joanne’s family is] subscribed to”.

Not succumbing to the scam, Peh proceeded to ask the caller for a phone number so that she could make the necessary verifications.

When she told the caller that she would check first after receiving the mobile number, the caller confidently replied: “Sure, I’ll call you back in an hour.”

“I then called Singtel at 1688 and spoke with the operator who verified that the mobile number provided is unofficial and that it was likely a scam,” wrote Peh.

According to the operator, scammers would typically ask for personal information.

Peh was told not to disclose such information and was advised to report the incident through the anti-scam hotline (1800-255-0000).

Turns out, the actual anti-scam helpline is of a different number (1800-722-6688) after Peh’s call was directed to the non-emergency police hotline.

“I stated my purpose to which the officer replied, uninterested in the details of the call I received, that the police are already aware of the scam. Then silence. The redundancy of the call was blatant. I thanked him, hung up and wondered — ok so the police is aware but what about the public?” Peh wrote.

Read Also
Joanne Peh in Guangzhou: No kid-sized masks, stitching up adult ones to fit my kids 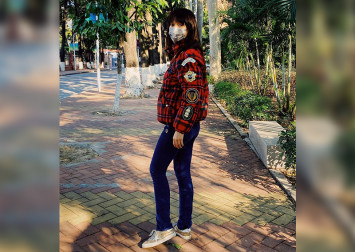 The 36-year-old highlights that individuals should never reveal their personal information or give access to premises until they have cross-checked the other party’s identity and purpose of call/visit.

According to her, the same rules apply even if the caller or visitor is a person of “authority”.

“Scammers always use our fear of disruption to their advantage – the story always starts with something being wrong,” she adds.

To avoid falling for scams and when in doubt, Peh advises doing a Google search on the official hotline of the company the person claims to represent, as well as getting the person(s) names and ID numbers to be used for cross-checking of information.