Cheating scandal: Jacqueline Wong's show will be aired in October but she is reportedly switching careers

SINGAPORE - Jacqueline Wong has reacted for the first time to her show being scheduled for airing in October.

The TVB actress was caught in a cheating scandal with Hong Kong singer Andy Hui in April and several television shows involving her were affected.

The Offliners and The Maid Alliance were canned, while Forensic Heroes 4 was reshot to remove scenes with Wong, with her role in the TV drama being replaced by actress Roxanne Tong.

Finding Her Voice, where Wong has a leading role, was also scheduled to be reshot, but the reshooting was cancelled due to the difficulties in accommodating the different schedules of the actors.

Finding Her Voice has been slated for prime-time airing from Oct 7 and earmarked as one of the TVB dramas to mark the 52nd anniversary of the TV station this year.

TVB was reportedly planning to arrange for Wong to film an interview to pave the way for her eventual return, but staff were unable to contact her despite repeated attempts. The 30-year-old actress had left for the United States after the scandal broke.

Finding Her Voice producer Wong Wai Sing told the Hong Kong media on Sunday (Sept 15) that he has received a text message from the actress, who said: "I am grateful that the efforts of the seniors, King Sir and other actors, have not been wasted. All the best to everyone."

She did not reply to questions on her current situation.

Finding Her Voice is an inspirational drama involving several veteran actors, including Chung King Fai, who is also known as King Sir and was reportedly unwell during filming. 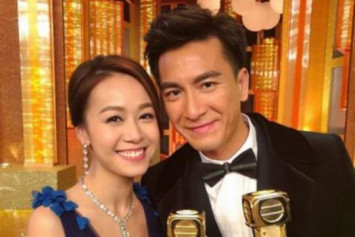 According to Apple Daily, Wong is switching careers and plans to become a real estate agent in the US. She has decided to drop the use of her English name Jacqueline and adopt a new name.

The report says she has no plans to return to Hong Kong and will quit the entertainment industry as she was deeply affected by then boyfriend actor Kenneth Ma breaking off with her despite her attempts to seek his forgiveness.

She has also decided to stay in the US as her sisters have been affected by the scandal as well and she did not want to further implicate her family.