BEIJING - In the photo, she is seen walking swiftly to a waiting car, keeping a low profile in black attire, cap and dark glasses.

But the man behind Fan Bingbing gives the plot away to waiting paparazzi. He is holding a big umbrella - it must be to shield a celebrity from prying eyes, what else?

The photo, snapped outside Beijing airport on Monday (Oct 15), marks the first time that China's most famous actress has been seen in public in more than three months.

Dubbed the nation's highest-paid celebrity for the past four years by Forbes magazine, her tax-evasion struggles with the authorities had kept fans riveted for months.

Rumours floated that she had been arrested and that she had even tried to escape to the United States with the help of gongfu star Jackie Chan. 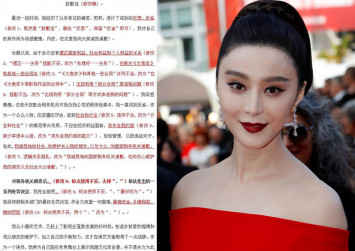 Things were made clearer on Oct 3 when the authorities slapped a fine of 883 million yuan (S$176 million) on the 37-year-old.

According to the Shanghaiist portal, that announcement was followed by a Weibo post from Fan who broke her months-long silence to state that she was "deeply ashamed" over the under-reporting of income.

While some netizens were upset that she had been spared a jail sentence, others noted that a 2009 amendment to China's Criminal Law provided for a fine to be levied on a first-time offender.

But some tax officials probing her case were punished for "poor management".